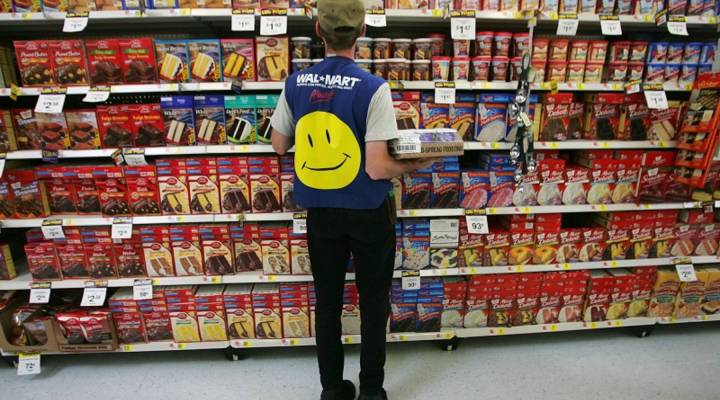 Executives over at Wal-Mart are trying to get your attention–with a big yellow smiley face. This week, the floundering retail giant said it’s bringing back that round emoji-looking grin that used to be the company’s low-price sticker icon.

And that’s not all the company’s doing to try to change things up: In January, Wal-Mart stores announced raises for more than a million workers. In May, it said it’s bringing back in-store greeters. And this week, it announced it’s partnering with Uber and Lyft to test out grocery delivery in Phoenix and Dallas.

Mara Einstein, a professor of media studies at Queens College and author of a recent book on advertising and branding, thinks the move to bring back the smiley might be off base.

“I mean, I question the smiley face … because it’s such a dated imagery,” she said.

She said to compete with companies like Amazon, Wal-Mart can’t be retro; it needs to become a name in the digital and delivery world. At the same time, she thinks Walmart’s good old low-cost image has been damaged by protests over wages. And trying to move into upscale grocery items like organic foods and sushi has furthered muddied the waters in terms of the store’s identity.

“It’s really hard to be everything to everybody, because then you end up being nothing to nobody.”

Still, some of the multifaceted turnaround attempt seems to be working.

Wal-Mart’s annual shareholder meeting Friday was a bit of a pep rally, coming off of a stronger quarter than expected.

“I wouldn’t say it’s quite a comeback, but it’s definitely a better story than it had been for awhile,” said Forrester analyst Sucharita Mulpuru.

Next up in the comeback effort, Wal-Mart is testing out drones to work in its warehouses.