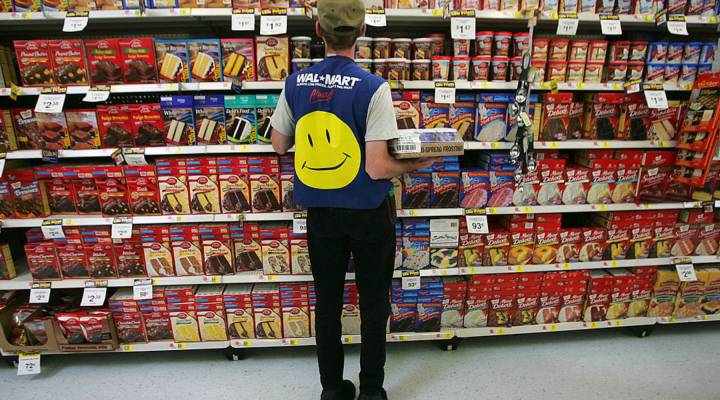 COPY
An employee restocks a shelf in the grocery section of a Wal-Mart Supercenter in 2005 in Troy, Ohio. Chris Hondros/Getty Images

An employee restocks a shelf in the grocery section of a Wal-Mart Supercenter in 2005 in Troy, Ohio. Chris Hondros/Getty Images
Listen Now

Are you the one at the grocery store who’s always Jenga-ing your way through a brown mountain of potatoes to get the best one? Or debating with the deli clerk about proper ham slice thickness? It’s OK. You’re not alone. And Wal-Mart loves you very much.

On Thursday, Wal-Mart reported surprisingly strong earnings, bringing unexpected cheer to Wall Street in a period where many big brick-and-mortar retailers have announced far darker results. Competition from Amazon and other online retailers is getting a lot of the blame for the current doom.

But Wal-Mart, earth’s largest retailer, is faring better, in part because it is a giant in groceries, which make up more than half of the company’s revenue. Despite some well-funded efforts, online grocery selling is still a challenge. Many customers just haven’t taken to grocery shopping online, where they can’t squeeze the fruit and eyeball the meat.

It’s also much harder for e-commerce sites to sell and deliver groceries than, say, books in cardboard boxes. They need refrigerated storage and protective packaging if they’re going to ship eggs, milk and chicken cutlets. There’s also the need for perishables to arrive when the customer’s home, so the food doesn’t spoil.

Wal-Mart’s advantage may not last forever, of course, as Amazon and others are working hard to move more grocery shopping online.