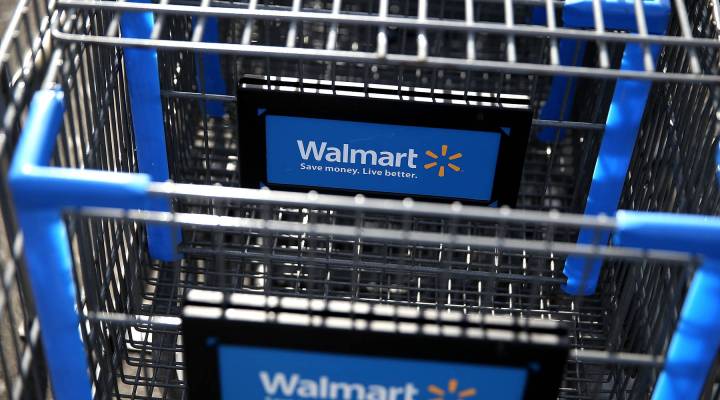 Wal-Mart Stores Inc. report adjusted fourth-quarter earnings of $1.49 a share, compared to $1.61 a share for the same period last year. Total revenue was $129.7 billion; after adjusting for currency effects, the company reported revenue of $134.4 billion, up 2.2 percent from one year ago.

Wal-Mart is the largest private employer in the U.S. and the biggest brick-and-mortar retailer on the planet. And it’s hit a rough patch — in terms of profitability, growth and stock-price — since the Great Recession.

“They are not the innovators anymore,” said Charles Fishman, author of “The Wal-Mart Effect: How the World’s Most Powerful Company Really Works.”

“They created the retail ecosystem. Now, the retail world is changing out from under them.”

Marc Cohen, director of retail studies at Columbia University Business School, said Wal-Mart has made a significant foray into e-commerce, and it’s invested a lot in technology and people to be a leader in the space.

“They’re very proud of Walmart.com, which is enormous and has been growing 20 to 30 percent per year,” said Cohen. “But at the end of the day, they’re still a tremendous also-ran in contrast with Amazon.” And Cohen pointed out that as Wal-Mart increases its e-commerce footprint, it attracts some of its brick-and-mortar customers to shop online instead, cannibalizing its store sales.

Wal-Mart continues to face fierce competition for customers and market-share from Amazon, which also has low prices, plus huge selection and lower operational costs than Wal-Mart (it doesn’t have to pay for retail stores and their employees). Wal-Mart is also battling market encroachment by dollar-store chains.

Wal-Mart is raising pay for more than one million workers this year — for a cost of $2.7 billion, according to the company. It said it is also improving scheduling and benefits. The goal is to boost worker retention and morale, as well as counter public criticism of Wal-Mart as a bad employer. Charles Fishman said that in the long run, having more satisfied, better-trained workers could boost customer satisfaction and contribute to higher sales and profits at Wal-Mart stores.