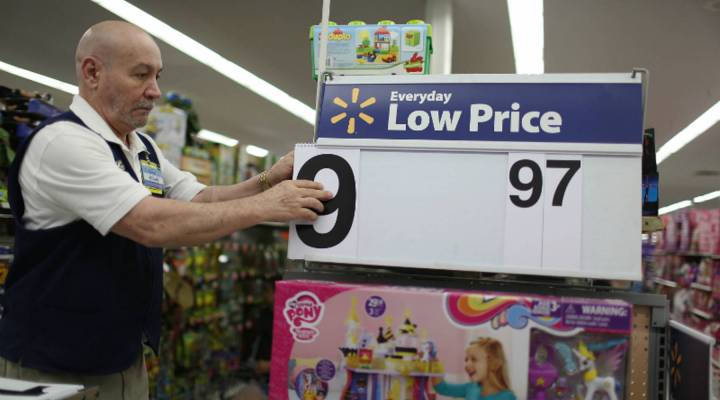 Price-matching has been in the news this week: Amazon customers criticized the retail giant for ending its practice of matching cheaper prices. Amazon soon shot back it never had such a policy, except for TVs.

Now Wal-Mart is ending price-matching in 500 of its stores. Customers have traditionally been able to come in brandishing a cheaper rival’s ad – and get refunded the difference. As of June 9, they’ll be able to price check on an app and get a gift card back instead of cash.

Wal-Mart said by doing this it’s putting low prices first. It says it’s slashing prices on foods and other staples up front – so there’s no need to price match. Phil Lempert of SupermarketGuru isn’t buying it. He said with the minimum wage going up, Wal-Mart needs to save on costs.

“If you do get a price match guarantee, you’ve got to go to a salesperson. The manager has to get involved,” he said. “So someone there might be looking at the number of hours they spend labor-wise managing this program.”

He said it’s cheaper to get customers to check prices on the store’s app.

Paula Rosenblum of RSR Research said the problem with this move is customer loyalty. Or the lack of it.

“Have they built up enough trust —and that’s what this test is about – that they can, quote, promise that they will have the best discounts and customers will believe them?” she asked.

She said Wal-Mart is no longer the low-cost provider anyway – rivals from Amazon to Aldi have muscled in on that territory.