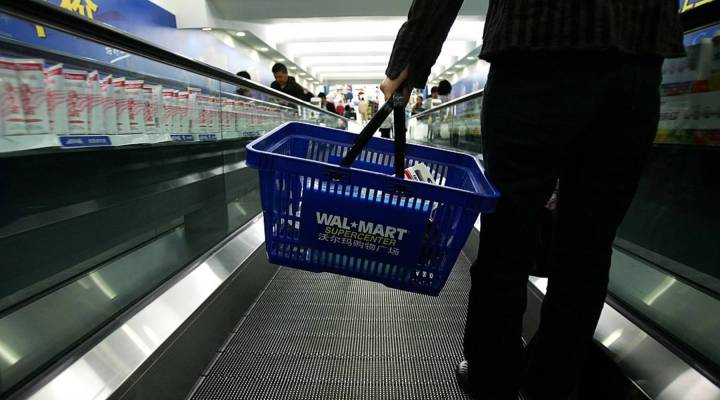 Wal-Mart reported a higher than expected profit last quarter, but it’s no secret the company hasn’t been happy with its performance on the e-commerce front.

Reports say the retailer may be trying to change that by buying Jet.com, the upstart e-commerce platform set up as a rival to Amazon. But despite spending millions on tech and marketing, Jet.com is finding Amazon harder to take on than it thought.

Why would Wal-Mart take on Jet?

Well, Wal-Mart’s online sales have been ticking up, but not nearly as fast as Amazon’s. Brian Yarbrough is a retail analyst with Edward Jones. He said everyone in retail used to react to what Wal-Mart did – now, Wal-Mart is trying to keep up with Amazon. He said in short, buying Jet.com could mean more sales for Wal-Mart.

“The Jet.com customer is a bit higher income than your average Wal-Mart customer,” he said, “and I know Wal-Mart has talked about trying to move up the income scale, so it would give them an opportunity to maybe cater to a higher income customer.”

Larry Chiagouris is a professor of marketing at Pace University. He said if Wal-Mart buys Jet, it’s an admission that Wal-Mart couldn’t conquer online on its own. But he added if the two companies merge…they could.

“I think it’s going to be a formidable competitor to Amazon,” he said, “simply because Jet will benefit from the existing purchasing power Wal-Mart has, and the existing sophisticated logistics and supply chain management that Wal-Mart has.”

And Wal-Mart will benefit from Jet’s technology.  Paula Rosenblum of RSR Research said the company’s algorithm determines the best price and shipping depending on where a product is shipping from.

If the deal goes through, Walmart will reportedly pay about $3 billion.

Correction: A previous version of this story misspelled Larry Chiagouris’ name. The text has been corrected.