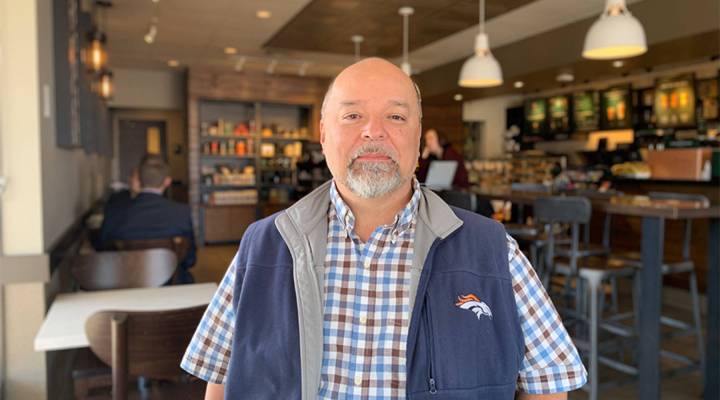 COPY
Albert Romero, 50, has filed for unemployment insurance while he waits to return to his job at the U.S. Department of Commerce in Boulder, Colorado. Amy Scott/Marketplace
Government shutdown 2019

Albert Romero, 50, has filed for unemployment insurance while he waits to return to his job at the U.S. Department of Commerce in Boulder, Colorado. Amy Scott/Marketplace
Listen Now

Five days into the partial government shutdown, just after Christmas, Albert Romero filed a claim for unemployment insurance with the state of Colorado. He does administrative work for the U.S. Department of Commerce in Boulder, and had been furloughed along with thousands of federal workers in the state.

“I just wanted to get my name in the queue to ensure that I could meet my obligations,” Romero, 50, said. “Whatever little income that I could get through unemployment would help definitely pay for the mortgage and car payment.”

Nearly a month later, he has yet to receive a check. The waiting period in Colorado can be four to six weeks. Fortunately, his wife just got a job as an accountant, after being unemployed for months. He figures they can last until March without missing bills.

“I’m hoping that we’re back before the six-week waiting period so that we can just go back and do our jobs,” he said. “More than anything, the people that I’ve talked to, we definitely want to continue to do our work and get paid for what we do.”

As the shutdown drags on, more workers are turning to unemployment insurance for help. The U.S. Labor Department said Thursday more than 10,000 furloughed federal employees filed unemployment claims during the week that ended Jan. 5, up from fewer than a thousand per week prior to the shutdown. In Colorado, according to the Denver Post, federal workers account for 20 percent of claims filed since the shutdown began.

“Unemployment insurance is there to help workers who’ve become unemployed through no fault of their own and their families, but also their communities,” said Michele Evermore with the National Employment Law Project. “People who receive an unemployment benefit spend that in the local economy.”

Kristin Floress, a federal research scientist based near Chicago, got her first unemployment check last Friday, two weeks after applying. And just in time, too. With two young children, she and her husband are getting by on his paycheck as a part-time barista. The shutdown is just the latest in a series of financial challenges they’ve faced in the past year.

“The dishwasher breaks, we get into two not-at-fault accidents, but our deductibles still haven’t been recovered, the basement flooded,” she said. “It was just one thing after another which really depleted the savings that we did have.”

Benefits typically cover 30 to 50 percent of a workers’ lost paycheck, Evermore said. Those workers will have to return the money after they receive back pay, and they may face some unique challenges in applying. Gabrielle Roesch-McNally, 37, a postdoctoral fellow with the Department of Agriculture in Corvallis, Oregon, had to fax a year’s worth of pay stubs to the state unemployment office – a workaround, she said, “because they can’t confirm my employment because my employer is not responding to these kinds of requests, or not very quickly.”

To qualify, Roesch-McNally said, she also has to prove she’s actively job hunting. “It is odd, because I do have a job that I would like to get back to and I think I do a fairly good job at,” she said, “so it’s complicated and it’s not without a fair number of hoops to jump through.” They’re hoops she can’t afford to avoid, because if the shutdown lasts much longer she might actually need a new job.