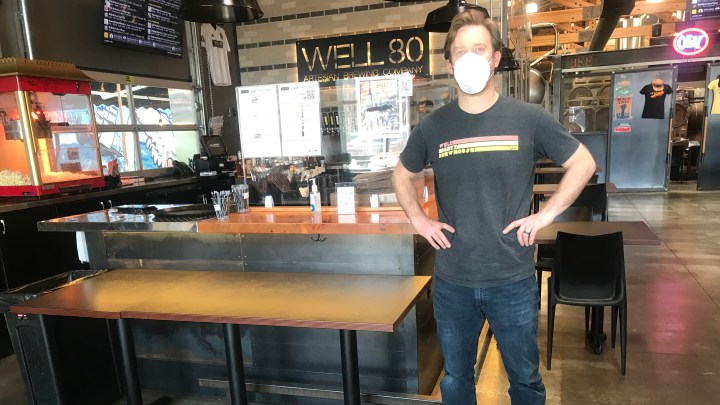 Every week for the past year, states have received more first-time jobless claims than at any point in the Great Recession. Eighteen million Americans were collecting unemployment benefits at the end of February (under state and federal programs). The unemployment trust funds that states use to pay benefits, funded by payroll taxes on employers, have been depleted — 20 states and the District of Columbia are now out of money altogether and borrowing from the federal government.

So some states are reforming their unemployment systems — changing the rules for benefits, and the taxes on businesses that pay for them. Washington State is in the forefront of those efforts.

Business is starting to get back to normal at Well 80 Brewhouse in Olympia, Washington, the state capital. Sitting at an outdoor table on the covered patio, owner Chris Knudson said the state has gradually relaxed COVID restrictions, and now allows indoor dining at 50% capacity.

“We’ve added plexiglass barriers everywhere,” Knudson said. “We’re really strict with mask-wearing—half of my job now is just walking around telling people they need to put their masks on.”

A year ago, when Washington ordered its first coronavirus lockdown, the restaurant had to shift to takeout-only on a dime. “When we first had to close down, we basically had to lay everybody off, almost our entire workforce.”

That was about 25 bartenders, servers, cooks, and dishwashers. “It’s been really tough for a lot of them,” said Knudson. “Fortunately, most of them have been able to get unemployment. It would have been a disaster if it wasn’t there.”

But that wave of unemployment claims led to a big problem for Knudson and other business owners who laid off workers en masse early in the pandemic: “Geez, our insurance premiums are going to go way-the-heck up,” said Knudson.

That’s unemployment insurance premiums, the taxes that employers pay into the state trust fund that pays jobless benefits. If an employer lays off a lot of workers in one year, its premium typically goes up substantially in the following year.

Washington State Sen. Curtis King (R-Yakima) said that businesses like Knudson’s were facing a huge spike in their unemployment taxes this year: “In some cases, a 1,000% increase,” said King. “You have businesses all around the state that are just hanging on by the skin of their teeth, doing everything they possibly can to keep their doors open. It would just take more of these businesses down, and they would never be able to reopen again.”

To help them, King co-sponsored a bill (since approved by the Washington House and signed by the governor) that defers those taxes, preventing $920 million in automatic unemployment insurance tax increases from taking effect this year. Some tax increases are scheduled to kick in in future years, since Washington still needs to replenish its unemployment trust fund, which has fallen during the pandemic from $4.7 billion to $1.6 billion, according to the Washington Employment Security Department.

Washington State Sen. Karen Keiser (D-Des Moines) was the principal sponsor of the new law. “We are looking at a bit of an economic rebound,” Keiser said, “so that will help, because the Microsofts and Amazons and Costcos of the world are still paying their premiums as normal.”

Keiser said the new law will also raise the state’s minimum unemployment benefit, starting in July, by about 35%—from $201 per week to $270 per week. “If we were going to give much-over a billion dollars in tax breaks for business,” said Keiser, “we should also help the poorest workers, those who earn somewhere between $21,000 and $27,800 a year.”

Washington’s not the only state trying to reform its unemployment system. Legislators in Vermont are considering a bill that would increase overall benefits by 20% and add a $50/week benefit for dependent children. A bill in Colorado would allow undocumented workers to receive jobless benefits.

Some other states are moving in the opposite direction, said Alexa Tapia, unemployment insurance campaign coordinator at the National Employment Law Project. “We’re beginning to see a repeat of what we saw after the last recession — states are beginning to restrict or limit benefits,” Tapia said. She cited legislative initiatives in West Virginia, Tennessee, Ohio, Kansas, and Arizona. A bill in Florida would tax online shoppers to refill the state unemployment trust fund, sparing employers a big tax hike.

In Olympia, Washington, Well 80 Brewhouse has continued holding its Tuesday Trivia Night virtually, via Zoom, for the past year. But in mid-March, for the first time since pandemic lock-downs began, the event was also broadcast live on the brewpub’s big-screen TVs, so people could come in, drink, eat and play in person. Owner Chris Knudson pumped up the crowd with periodic score updates: “We have back with us tonight Quiz Khalifa — Quiz Khalifa is here with their 10 points, nice job you guys …”

Knudson said he’s grateful to have most of his employees back from unemployment and working again, and to be getting some relief on his upcoming unemployment tax bill. “Without government assistance we wouldn’t be here anymore,” he said. “And I think that’s true of most restaurants. And if we’re not here, you know, people aren’t working.”

Correction (March 26, 2021): A previous version of this story misspelled Washington State Sen. Karen Keiser’s name. The text has been corrected.