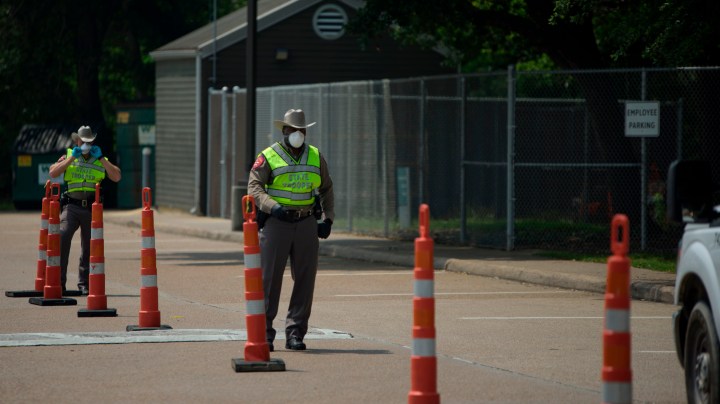 COPY
States struggling the most to keep up with unemployment claims, like Texas, may need to tap new funds soon. Mark Felix/AFP via Getty Images
COVID-19

States struggling the most to keep up with unemployment claims, like Texas, may need to tap new funds soon. Mark Felix/AFP via Getty Images
Listen Now

With new government data Thursday, around 22 million people have now signed up for state unemployment benefits in the last month during the COVID-19 emergency.

In just the week ending Saturday, it’s 5.245 million new unemployment claims. States pay out these benefits — and states are strained.

Each state pays out unemployment benefits from a trust fund paid for by taxes on employers.

“In good times, you have significantly more going in than is going out. But you’re supposed to save up for times like the one we’re experiencing now,” said Jared Walczak, a researcher with the Tax Foundation.

Walczak says according to federal data, several of the hardest hit states, like California, New York and Texas, could be running low on funds in a matter of weeks.

“And some of these same states struggled with this during the Great Recession and only very recently paid off the debt that they accrued,” he said.

When unemployment funds run out, states still have to pay the benefits, they just have to borrow the money from somewhere else — usually the federal government.

“If this lasts more than three or four months just about every state will have to borrow,” said Chris O’Leary, an economist with the Upjohn Institute for Employment Research.

Borrowing could result in higher taxes for employers or reduced benefits down the line. But, O’Leary says, the federal government could just give the money to states — it has before as part of disaster relief.