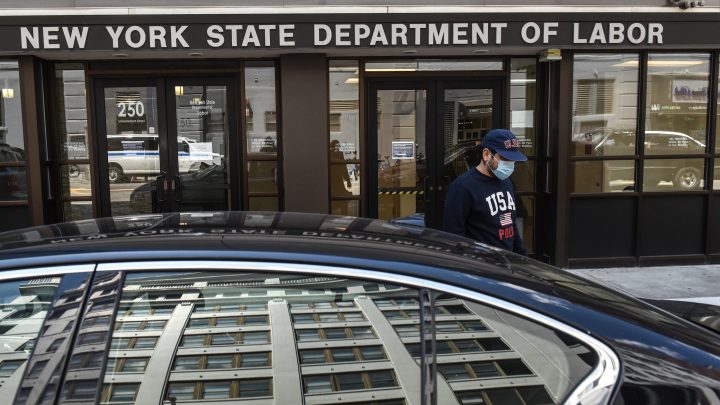 A view of the New York State Department of Labor. Stephanie Keith/Getty Images

As we’ve heard week over week, the number of people filing unemployment claims has been staggering: More than 54 million Americans have applied for benefits since the start of the coronavirus pandemic.

While weekly numbers had declined in the past several months, the number of Americans filing first-time unemployment claims rose for the second week in a row Thursday amid rising cases.

Unemployed individuals receive insurance from their states, with each state running its own system and determining eligibility, duration and maximum and minimum benefits. The average weekly benefit in May ranged from about $44 in Oklahoma to about $497 in Washington, according to the U.S. Labor Department.

The CARES Act added an extra $600 a week, paid for by the federal government, for 13 weeks — which expired on Friday.

States pay out their usual unemployment benefits through what’s called an unemployment compensation trust fund. Michael D. Goodman, a professor of public policy at the University of Massachusetts Dartmouth, said the money typically comes from payroll taxes, meaning employers pay for it.

A dozen states — including California, Delaware, Massachusetts, Minnesota and Texas — have basically exhausted their funds and requested federal loans to continue to make payments, which have been approved.

Jared Walczak, vice president of state projects at the Tax Foundation, said this is a significant long-term issue for businesses that will face higher state — and potentially federal — unemployment insurance taxes to replenish those funds and pay off debt. But it’s not an immediate concern for unemployed workers, who will continue to receive their payments.

Katie Baird, a professor of economics at the University of Washington Tacoma, said unemployment insurance is a benefit that employees are legally entitled to based on criteria such as losing work through no fault of their own.

Congress has competing plans for how much additional assistance it’ll provide, with Senate Republicans recently proposing to give workers $200 a week in unemployment benefits on top of the amount they receive from their states.

Some states, like California, which has already borrowed $6.5 billion from a federal trust fund, are looking into providing their own supplemental unemployment benefits if Congress doesn’t extend federal ones. California ended up borrowing $10.7 billion to pay unemployment benefits during the Great Recession and paid that money back just two years ago by raising taxes on employers, the Los Angeles Times reported.

Walczak said many states were unprepared for this year’s crisis because they spent many years paying off debt that accumulated during the Great Recession, which hit more than a decade ago. Now they have to make hard choices about the tax rates they’ll impose on unemployment benefits and the future size of those payments.

Walczak said some of the Plains states have generally been better equipped to handle a crisis of this magnitude because their benefits and taxes were well-aligned.

“You have some states that have low taxes and generous benefits, which is a tough combination,” he noted. “You can choose one, but you can’t choose both.”

In Washington state, Baird pointed out, the trust fund had almost $5 billion before the COVID-19 crisis. But after huge recent payouts, it appears now that the fund may be depleted by late 2020 or early 2021.

And in Massachusetts, the unemployment insurance trust fund may face a $6 billion deficit by the end of 2021.

Goodman, of the University of Massachusetts, said the state typically pays more generous unemployment benefits than other regions.

Coming out of the Great Recession, he noted, the state didn’t have a large balance. But when tax rates started to increase, employers pushed back, which prompted the state to freeze the tax rate.

“There are options: You can reduce spending, you can increase taxes. I suspect that there’s no way of getting out of this without doing some of both,” Goodman said.