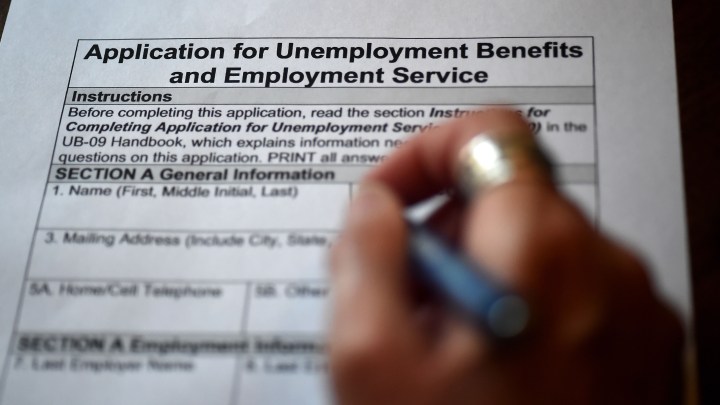 About half of all states have cut off at least some enhanced federal unemployment benefits. That includes the extra $300 per week provided with expanded eligibility for freelancers or gig workers as well as extended benefits for the long-term unemployed — all of which were funded through the end of September.

Leaders in those states have argued that the generous benefits are keeping people from going back to work, but a series of recent lawsuits argue that governors don’t have the authority to reject the federal aid.

When the national unemployment insurance system was established during the New Deal era, states were given control over their own programs, according to Chris O’Leary, with the Upjohn Institute for Employment Research.

“Essentially, a federal-state system was established. It wasn’t forced on states,” he said.

They can decide everything from eligibility requirements to the level of benefits. But this week, a judge in Maryland ordered the state to hold off on cutting federal benefits as a lawsuit moves forward.

It’s being led by attorney Alec Summerfield on behalf of the Unemployed Workers Union. He pointed to language in the law that created Maryland’s unemployment system.

The law stated “that the whole point of unemployment insurance is to combat involuntary unemployment and that unemployment itself is a menace. They literally use the word ‘menace’ to the morals, welfare and safety of the community,” Summerfield said.

So, the law directs the state to cooperate with the federal government. “Cutting these benefits two months early does not fulfill the state’s responsibility to combat unemployment,” he said.

“Our law in Ohio was passed in 1936, right at the height of the Great Depression. And so I think it was really important at that time for the Legislature to make sure that people wouldn’t play politics with unemployment benefits,” Dann said.

That’s the case for many states, said Andrew Stettner, with the Century Foundation.

“A lot of the laws are kind of similar because they were developed around the same time with the same guidance,” he said.

Suits in Texas and Indiana are following a similar path, but they could face tough barriers: The federal CARES Act that created enhanced unemployment benefits specifically allowed states to opt out.