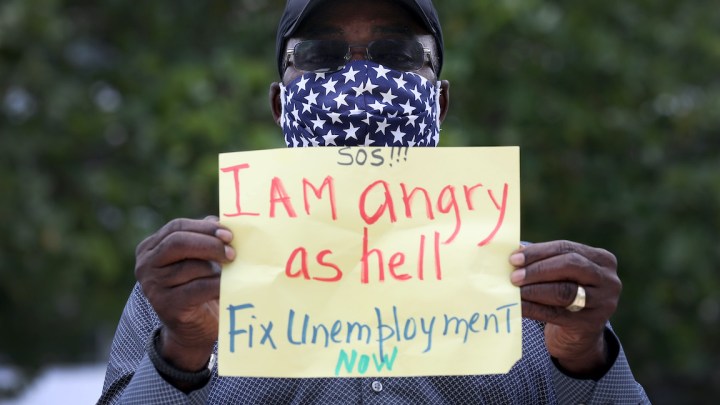 COPY
Conservatives have argued that enhanced unemployment benefits were meant to buffer workers from the worst of the pandemic, which has now passed. Joe Raedle/Getty Images
COVID & Unemployment

Conservatives have argued that enhanced unemployment benefits were meant to buffer workers from the worst of the pandemic, which has now passed. Joe Raedle/Getty Images
Listen Now

Just over 400,000 people filed new unemployment claims last week, the lowest number since the pandemic began and a sign of economic momentum as the U.S. gets the coronavirus under control. But it’s still not quite back to “normal” — or what normal was before the pandemic, when most weeks averaged about half as many unemployment claims.

Now at least two dozen Republican-led states have announced they’re terminating the additional federal unemployment benefits put in place during the pandemic, some as soon as next week. The benefits were set to extend through September.

It’s not just the extra $300 a week in federal unemployment payments most of these states are ending. It’s also benefits for people who don’t qualify for state unemployment insurance: gig workers, freelancers and the long-term unemployed, like Marcellus Rowe in Dunwoody, Georgia, where federal benefits will end June 26.

“I will be receiving nothing, unfortunately,” he said. “I have no idea how I’m going to live day by day, especially with paying rent.”

Rowe lost his job at a public transportation agency last year and said he hasn’t found work to match his previous pay of $16 an hour.

“Because that was helping me to pay my bills,” he said. “Ten dollars an hour is just not gonna cut it.”

Conservatives have argued that enhanced unemployment benefits were meant to buffer workers from the worst of the pandemic, and now as state economies reopen and the dangers from the virus recede, they’re doing more harm than good.

“I see a labor market where employers clearly want to hire workers, but there are not enough workers there to be hired,” said Michael Strain, a scholar at the American Enterprise Institute. He said scaling back benefits could incentivize more people to return to work and stimulate economic growth.

“My expectation is that states that are not participating will see workers return back to work more quickly, at a faster rate and in larger numbers,” he said.

But Andrew Stettner, senior fellow at the Century Foundation, said recovery is not so straightforward.

“We want to believe that we can just turn the lights back on, everyone goes back to their seats like a game of musical chairs,” he said. “But that’s not really how it works.”

Industries like tourism and entertainment have been slower to bounce back. Some businesses, like movie theaters or gyms, may suffer permanent setbacks. And some people face health challenges or child care issues caused by the pandemic that prevent them from finding work.

“Those are the ones on the federal programs,” he said, “those people that have the greatest barriers to work.”

While rising vaccination rates might make it feel like we’re done with COVID, Stettner said, COVID isn’t done with the economy.