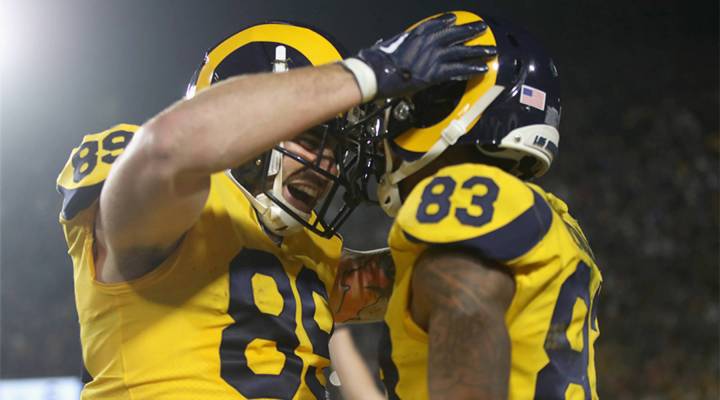 If you follow the NBA and the NFL you’re probably having a pretty good time right now, especially if you like to see teams put up big numbers. We’re in the midst of a scoring boom in basketball and football. Some of this is a natural evolution of sports. Some of it is intentional.

In this NFL season, one game in particular is a good illustration of the trend. On the Monday before Thanksgiving, the Kansas City Chiefs squared off  against the Los Angeles Rams in the L.A. Coliseum. It was the highest-scoring Monday Night Football game ever and the third-highest scoring game of all time. The Rams won, 54-51.

The points onslaught was the talk of the sports world the next day. “That was just fun,” said Fox Sports host Colin Cowherd on his show. “You had how many total yards? 14 combined touchdowns. I loved it.”

The high-scoring game shouldn’t have surprised anyone. Through the first 12 weeks of the NFL season, teams were averaging a full point per game more than at any time in league history and this season only missed setting a record for combined points per game by a tenth of a point.

In the last few years the NFL has adopted new rules to protect quarterbacks and the league is changing the way referees enforce existing rules. Case-in-point: illegal contact. That’s essentially when a defensive player hits a receiver to stop him from getting where he’s trying to go. Illegal contact penalties in the NFL have tripled this season compared to last year.
Another factor behind the scoring boom: players are getting more athletic. Draft picks running the 40 yard dash in 4.4 seconds used to be remarkable and rare. Now, that’s routine.

Combine better athletes with new rules to boost scoring, and you get a show. “The receivers are doing things that we’ve just never seen receivers do,” said Laufenberg. “How many one- handed catches have we seen in the NFL? If you went through the first 75 years of the NFL my guess is you might be able to find five.”

Here’s another theory floating around about the points explosion: Today’s athletes grew up on go-for-broke sports video games like “Madden NFL” and now they’re taking that style of play to the field.

“Video games were pretty rampant within the football program,” said Michael Welsh, a former offensive lineman at the University of Texas at Austin who’s just a few years out of college. “People would literally be playing Madden and then going straight out to playing actual football, you know?”

Whatever the reasons for the offensive explosion, fans seem to dig it.

“There’s something to be said about defense,” said John Weeks, who was in the stands at a recent Dallas Cowboys game. “Defense is beautiful, defense is amazing. But offense sells tickets.”

At the very least, offense attracts eyeballs. The NFL’s TV ratings have grown over the last year, most weeks by about 5 to 10 percent.

It’s not just the NFL where points are plentiful. Points per basketball game in the NBA are up almost four percent over last year as are TV ratings. NBA games are seeing their highest viewership in four years.

Kevin Pelton, who writes about the NBA for ESPN, said there’s no doubt the game is changing. “The smart way to play now is to play fast and your team gets criticized if your team doesn’t play a fast-paced style, so at the team level there’s been this trend toward playing a faster-paced, higher scoring style.”

Pelton said the run-and-gun style of the Golden State Warriors is the new norm. In a recent game, the Los Angeles Clippers set a record for percentage of 3-point shots made. But you know what? They lost. To the Warriors. It could be that the only thing that can counter all this dramatic scoring isn’t tenacious defense, but more and more high-powered offense. Teams, leagues, and fans are fine with that.