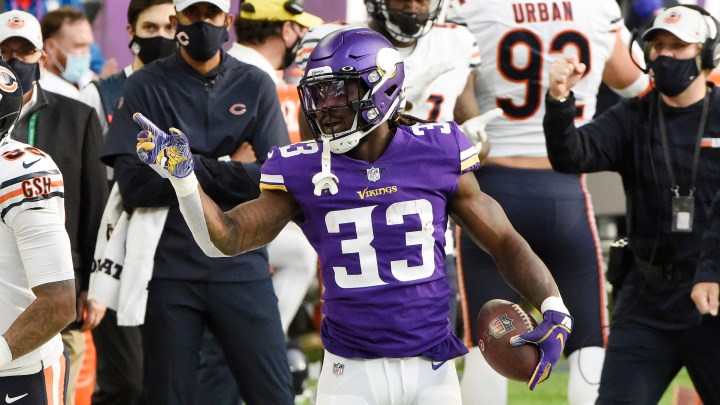 COPY
Vikings running back Dalvin Cook looked into replacing "33" with "4." But it reportedly would have cost him $1.5 million to purchase the old merch from the league’s sales outlets. Stephen Maturen via Getty Images

Vikings running back Dalvin Cook looked into replacing "33" with "4." But it reportedly would have cost him $1.5 million to purchase the old merch from the league’s sales outlets. Stephen Maturen via Getty Images
Listen Now

In April, the NFL announced it was relaxing one of its rules about the numbers players can wear. It now allows tight ends, wide receivers, running backs and defensive backs to wear single-digit numbers, a privilege that used to be reserved for quarterbacks, punters and kickers.

A lot of players have expressed interest because there’s a lot of identity wrapped up in the numbers NFL athletes wear. Unlike baseball and basketball players, football players wear helmets most of the time.

“We don’t see their faces during the games,” said Kevin Seifert, national NFL writer for ESPN. “We don’t necessarily know what a lot of NFL players look like if we’re just watching them in games, but their number is very recognizable.”

Some players simply prefer lower numbers, arguing that they make them look faster or stronger. Those changes will encourage serious fans to buy jerseys with the new numbers on them, often at $120 a pop.

Over the last four decades, jerseys have become a real source of revenue for the league and its players.

“Players receive two-thirds of the money that is generated by selling jerseys,” said Dan Kaplan, senior writer at the Athletic. “The other third goes to the union. And the union sets aside some of that into a pool for all NFL players.”

This means even third-string linemen who don’t sell a lot of jerseys will still get a check at the end of the season.

But there’s a catch with those new jerseys: The NFL has long required players who request new numbers to reach into their pockets and pay for the old jerseys.

“If it was a player’s choice to do it, then he should be responsible for buying up the inventory with his name on it,” said Jack Mills, who has been an NFL agent for 50 years. Mills said he hasn’t had to counsel any of his clients about a jersey switch, but he’s not sure it would ever be a sound decision.

“If they have to buy a large inventory, I would think it wouldn’t make sense,” he said. “Unless somehow they thought they were going to sell a large number just because they changed jerseys.”

The NFL told players they’d have to pay the full retail price for the old jerseys.

“Not even a friends-and-family discount, no sort of a bulk-rate buy,” said Mike Florio, editor-in-chief of Profootballtalk.com and author of the book “Playmakers: How the NFL Really Works (and Doesn’t).”

Minnesota Vikings’ star running back Dalvin Cook looked into changing his number from 33 to 4, but he already has a lot of officially licensed gear with “33” on it, so that ultimately didn’t make sense.

“The price that was quoted to Dalvin Cook landed in the range of $1.5 million,” Florio said.

That’s how much it would cost Cook to buy the stuff sold at the league’s official outlets. But some smaller retailers would be left holding the bag.

Vivian Ramirez runs a store called the Locker Room of Downey with her husband. It’s south of Los Angeles, so they sell lots of Rams and Chargers gear. She said the store orders jerseys from the league’s official wholesaler at least a year in advance.

“So, it’s a little bit of a gamble. You’re making an investment,” Ramirez said. And if a player changes his number, the store has to eat the cost.

“People just kind of get irritated. ‘Oh, you change [the] number.’ Now all the vendors, all the retailers like us, we’re just like, ‘Oh, now we’re sitting on this number and you weren’t even a popular player,’” she said.

Then there’s the question of what happens to all those old jerseys. Send them to a landfill? Start a dumpster fire?

LA Rams wide receiver Robert Woods, who is changing his number from 17 to 2, got advice from Rewilder, a sustainable design company focused on upcycling — turning old stuff into new goods, like making backpacks or jackets out of old jerseys.

“That is a big part of this — the education component for fans, in terms of what are ways to be more sustainable in life,” said Jenny Silbert, the company’s founder.

Woods hasn’t decided what to do with the old jerseys, but he’s committed to making the number change now. Even though if he chose to wait until next season, he wouldn’t have to buy the old jersey inventory.