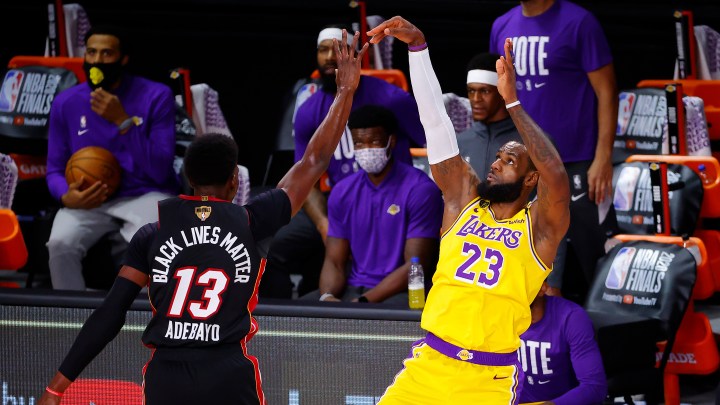 COPY
LeBron James of the Los Angeles Lakers shoots a 3-pointer against the Miami Heat during the 2020 NBA Finals in the "bubble" on Sept. 30. Kevin C. Cox/Getty Images
COVID-19

LeBron James of the Los Angeles Lakers shoots a 3-pointer against the Miami Heat during the 2020 NBA Finals in the "bubble" on Sept. 30. Kevin C. Cox/Getty Images
Listen Now

It’s been just over a month since the NBA’s “bubble” season ended, but another professional basketball season is set to tip off in December.

It will be a truncated campaign — and in some markets, teams will actually get to play in front of fans. So what are the economic arguments behind the league’s scheduling?

Right now, the NBA is going through the same bad business climate as a lot of other businesses, said Kenneth Shropshire, CEO of the Global Sport Institute and professor of global sport at Arizona State University.

“There is a major concern about making sure revenues flow at a level where you can maintain salaries at the same level,” he said.

The NBA is getting its new season started when more people are spending time at home — and other sports are in their off-seasons.

“The NBA’s calculation may be to sort of take advantage of that and provide an earlier start, so they can capitalize a little bit on the demand due to winter and an indoor activity being more in demand,” said Raghu Kodige, founder and CPO at TV data company Alphonso.

The NBA relies on all of the ad money it brings in on Christmas Day. The league has invested a lot in selling Christmas as basketball’s holiday, the way Thanksgiving is for football, said Courtney Cox, assistant professor at the University of Oregon.

“The maintenance of that kind of hoops holiday is really important,” she said.

The money made by starting in late December could add anywhere from $500 million to $1 billion to the NBA’s bottom line.

This new season will also cost the NBA hundreds of millions less to put on, because the teams won’t play in a bubble. And some may end up playing in front of crowds.

That poses some risks for the league, said David Berri, a sports economist at Southern Utah University.

“We’re probably going to see outcomes like the NFL where you’re going to see games canceled [and] games postponed,” he said.

And that would be bad for ad revenue.