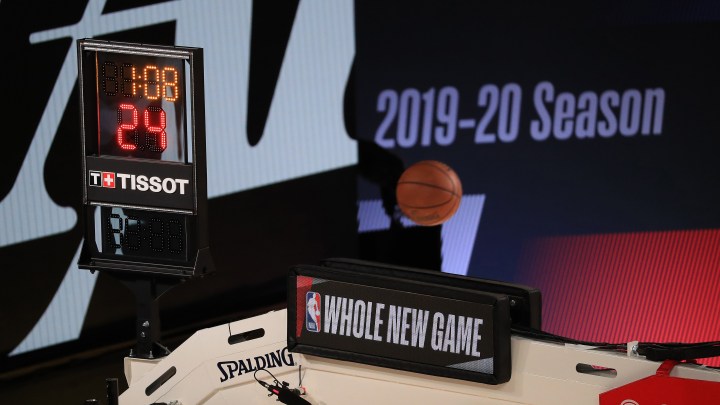 COPY
Had the league not finished the season and canceled the playoffs, the NBA would not have satisfied a billion-dollar TV contract. Mike Ehrmann/Getty Images
COVID-19

Had the league not finished the season and canceled the playoffs, the NBA would not have satisfied a billion-dollar TV contract. Mike Ehrmann/Getty Images
Listen Now

Pro basketball wraps up its interrupted regular season on Friday, and unlike college football or Major League Baseball, the NBA coronavirus “bubble,” with no positive tests for the last four weeks, seems like an undeniable success.

The league shut down in March after two players on the Utah Jazz tested positive for COVID-19. The league’s commissioner, Adam Silver, told players to ready themselves for tough salary negotiations in the years to come because the league’s revenue was going to be hurt by the pandemic. But Nola Agha, associate professor of sports management at the University of San Francisco, said that’s par for the course.

“For, I’d say, probably a century, professional leagues and teams have been telling us that they don’t have enough money and that they’re going to go out of business,” she said.

And because the NBA and its teams are private businesses, they don’t have to make their finances public, so nobody really knows how stretched their checkbooks are.

The NBA said the cost to operate the bubble at Walt Disney World in Orlando, where players and coaches eat, sleep, practice and play games, is more than $150 million. There also aren’t any fans there, and 40% of the league’s annual revenue comes from ticket purchases and in-game spending.

“It was important to them that they finished this,” said David Berri, a sports economist at Southern Utah University. “They obviously don’t have any gate revenue but they need to finish and get the television revenue.”

Had the league not finished the season and canceled the playoffs, the NBA would not have satisfied a billion-dollar TV contract. Broadcasters like ESPN and TNT would have sought something in return.

And at a time when people are stuck at home and watching a lot of TV, conventional wisdom says the NBA and its sponsors would be seeing massive ratings bumps, but Berri said that’s not the case. Ratings are down.

And Oklahoma City, Milwaukee and Portland don’t make up for New York, Chicago and San Francisco.

“At the team level, I think about it as revenue recovery,” Agha said. “They had tickets sold, they had suites sold, they had sponsors signed, they had their local television deals, and it’s scrambling, like every small business in America is trying to do, to figure out, how can I still get some of that revenue?”

The NBA playoffs start on Monday, Aug. 17 from the bubble in Orlando.