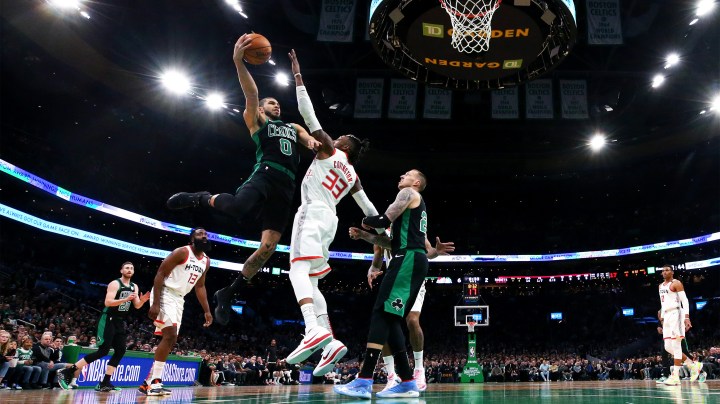 COPY
A Celtics-Rockets game in February, shortly before the season was paused. Maddie Meyer/Getty Images
Race and Economy

A Celtics-Rockets game in February, shortly before the season was paused. Maddie Meyer/Getty Images
Listen Now

The NBA returns tonight. Games won’t look like they did before the league hit pause in March: social distancing on the bench, no fans in the stands and no home court advantage.

The 22 teams have been staying at the Walt Disney World Resort in central Florida, in a quarantine “bubble.” The cost: more than $170 million.

Keeping the players satisfied while they’re in the bubble? Not easy, according to Dave Berri, a sports economics professor at Southern Utah University. Players are used to making their own choices, but “now you’re centralizing everything. So it’s one NBA making the decisions,” Berri said.

About everything from the blankets in the hotel rooms — not long enough — to the food. Players made fun of meals on social media and asked why the owner of the Houston Rockets got a catering contract.

J.R. Smith of the L.A. Lakers made an Instagram video about it a couple of weeks ago.

“Ya’ll don’t think it would have been dope to get some of these Black restaurants in the surrounding Orlando area?” he said in the video.

The NBA seems to be listening to what its players want. The league didn’t get back to Marketplace before deadline, but it is supporting players as they bring Black Lives Matter messages to the game.

Meanwhile, the players feel empowered. Courtney Cox is an assistant professor of race and sport in the Indigenous, race, and ethnic studies department at the University of Oregon. She said now the players are saying everything we do can be more intentional — including encouraging the league to spend bubble cash in the community.

“Everything that’s going on, not every organization has done this,” he said.

And in this economic climate, the newfound attention is welcome, Johnson said. Just Wednesday, eight people came in and asked for exactly what LeBron ordered: salmon, greens and mac and cheese.