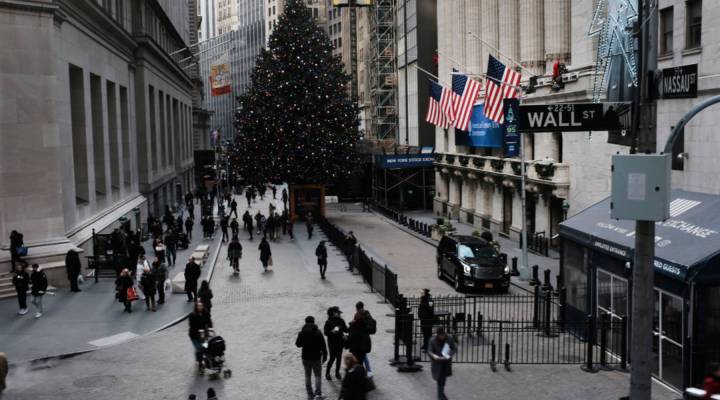 It’s getting harder to know what to make of the economy. The market is running scared, stock prices are plummeting but economists believe economic fundamentals remain strong. Here’s what may be feeding the disconnect.

December is usually a quiet month for the markets — usually. But factoring in the big sell-off on Christmas Eve, the Dow Jones and the S&P 500 are both down almost 16 percent this month and so far we haven’t seen the “Santa Claus Rally,” where markets tend to go up during the last week of December. And it’s not just stocks that have slumped. Oil prices are way down, as are foreign markets. Japan’s Nikkei index just went into bear market territory.

There’s also the trade war. Earlier this month, people questioned whether a meeting between President Trump and Chinese President Xi Jinping was as successful as it was advertised. Shortly after, the Dow Jones Industrial Average dropped nearly 800 points and has been falling ever since. Investors looking for cover from the sinking market have been grabbing up U.S. government bonds. You can see that in bond yields — the interest bonds pay — they’re down.

There’s the uncertainty coming from the White House. The government is partially shut down. President Trump reportedly inquired about firing Fed Chair Jerome Powell. Then Tuesday, the president did a modified 180, telling reporters that American companies are “the greatest in the world,” and that the market slump represents a “tremendous opportunity to buy.”

Corporate earnings have been strong this year on average and before the big plunge in prices, stocks were expensive. Even now, the S&P 500 is still up about 9 percent since Trump’s election.

There are plenty of signs the economy is still pretty strong. We’ve seen steady and consistent gains in jobs and wages have gone up, too. The labor market is tight — companies are scrambling to find enough workers to fill positions — consumer confidence is high and people have not been shy about holiday spending. Overall, we’re still in one of the longest economic expansions in history. So, where are we headed?

GDP’s been hovering in the 3 percent range this year and economists generally expect it to slow to around 2 percent in the near future. That’s not the direction you want the economy to be moving in. Interest rates are also likely to keep rising through 2019. That means, for instance, that mortgage rates could still rise when there’s already signs of a cooling housing market.

So, for the moment, it looks like a glass half-full, half-empty kind of thing.