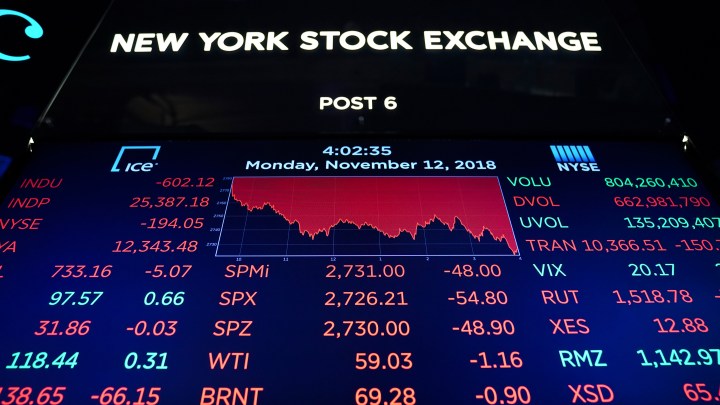 A monitor displays that day's final numbers following the closing bell on the floor of the New York Stock Exchange. Drew Angerer/Getty Images

A monitor displays that day's final numbers following the closing bell on the floor of the New York Stock Exchange. Drew Angerer/Getty Images

“Let’s do the numbers.” Music — to some degree of cheerful or dreadful — plays in the background as our host reads off a list of companies and financial statistics. We hear about the S&P 500, the Dow Jones and the Nasdaq, and what percentage they were up or down. We’re getting an update on the stock market — which is not the economy.

In its most basic sense, a stock market, or exchange, is a place where shares of publicly traded companies are sold and bought. Companies can be listed on stock exchanges in a few ways, but an initial public offering is the most common to join public markets. William Michael Cunningham, an investment adviser and CEO of Creative Investment Research, said that companies trade on public markets because it increases access to both buyers and sellers.

There are about 60 major stock exchanges across the world, with approximately 630,000 companies traded on those exchanges. Of those exchanges, the largest remains the New York Stock Exchange, which now has exchanges in both the United States and Europe.

“We recognize the New York Stock Exchange or Nasdaq as being stock markets, but when we refer generically to the U.S. stock market, we really mean the markets for all stocks — wherever they trade,” said Lawrence Harris, a professor of finance and business economics at the University of Southern California. He added that there are systems to ensure that the price of one company’s stock is generally the same across all markets on which it’s traded.

Then there are the indexes, like the Nasdaq Composite.

“Indexes are basically aggregations of stock prices, which are used to get a general determination and general feel of the direction of stock prices,” Cunningham said. Indexes don’t indicate how specific companies are doing, but give a general vibe of the stock market overall.

There are about 5,000 indexes in the U.S., though the most popular are the S&P 500, the Nasdaq Composite and the Dow Jones Industrial Average. Indexes are calculated in different ways. The S&P 500, for example, is a float-adjusted market-cap weighted index. That means it takes the sum of the market capitalization — the value of a company found by multiplying the number of shares by stock price — of 500 companies, and divides it by a published number called an index divisor.

“In some cases, you’re manipulating that aggregation statistically,” Cunningham said. “But for the most part, you’re just adding up company stock prices and dividing by the total number of stocks in the basket.”

The reason the direction of the market matters, Cunningam said, is because it indicates how investors are feeling. Typically, he said, you invest in a company if you think it’s going to be worth more in the future.

“One of the reasons why we refer to the market going up and down, and why it’s taken on such great import, is because it’s a reflection of the overall optimism concerning business conditions,” Cunningham said. “The thinking is that when the market is up, buyers are optimistic about future prospects for business activity.”

So if Company XYZ’s stock goes down 1%, that means the company is worth 1% less, and the theory is that investors are less confident in that company’s future than they were before. If indexes are down 1%, it indicates less confidence in the stock market overall.

Harris said noteworthy changes in indexes would be more than 1%, while 3% is significant and 5% or more is remarkable. For example, the infamous Black Monday of the Great Depression saw a drop of 13%, which continued to fall in the following days. In 2008, the Dow Jones dropped nearly 7% in one day during the height of the Great Recession.

If there’s one thing to keep in mind about the stock market, Cunningham said, it is that it fluctuates.

“It’s changeable, it’s volatile,” he said. “Evaluations are based on opinions, and again, opinions are constantly changing.”