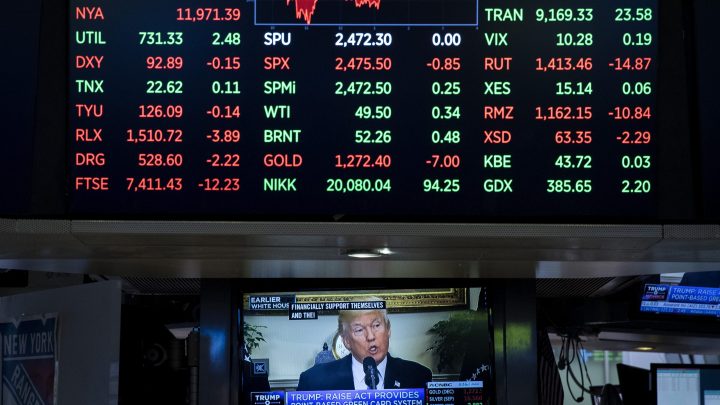 COPY
The floor of the New York Stock Exchange ahead of the closing bell on August 2, 2017. Drew Angerer/Getty Images

The floor of the New York Stock Exchange ahead of the closing bell on August 2, 2017. Drew Angerer/Getty Images
Listen Now

The markets often rise or fall in response to comments by President Trump — comments which he often makes on Twitter. The market responses are driven by algorithms, which take the president’s tweets into account.

Joe Gits runs Social Market Analytics, a Chicago company that compiles tweets that could affect stocks, and then passes that data along to traders. He spoke with Kai Ryssdal about why algorithms aren’t changed to encourage to stability. Market volatility isn’t a problem for traders, Gits said. “The algorithms want volatility,” he said. “The algos make money because of volatility.” An edited transcript of their conversation follows.

Kai Ryssdal: So what do these algorithms do when they see, for instance, a tweet or a statement from the president today that says, as I mentioned, talks with China are proceeding at a different level and everybody was really happy on Wall Street, apparently.

Joe Gits: Yeah, everybody was certainly happy today. So these algos are reading the president’s tweet using natural language processing, and our current president’s tweets are pretty easy to read with NLP, and they are either going long or going short.

Ryssdal: Okay, so we see all this happening almost in real time. The president tweets, and the markets move up or down depending on what the news of the day is, or frankly, whatever the Chinese say. Here’s the question. Algorithms are software, basically. They are written by people, people see these reactions and they see the markets going bananas one way or the other. Clearly, the people that write these algorithms say, ‘Oh, yeah, all that volatility is fine.’

Gits: The algos want volatility. The algos make money because of volatility. So if there’s a self-fulfilling prophecy, these algos start buying or selling, there’s going to be wave upon wave of buying and selling, and the retail is going to get in at the back end of it. So there is no incentives for the algos to dampen volatility at all.

Ryssdal: Retail getting it on the back end is actual human beings and mom and pops and what have you, right? They’re following the algorithms.

Gits: And they are so far behind.

Ryssdal: So when we look at this craziness, we should just say, ‘Yeah, that’s computers,’ and go on about our day.

Gits: It is computers, yes. And it’s growing. If you go back five years ago, when I started doing natural language processing and became a Twitter partner, there were very few firms that were taking this data and making trading decisions on it. Now, with the processing that can happen — and more and more firms are using natural language processing — it’s very clear where the president is going to go first. You never have to worry about whether he’s going to do it on the news, whether he’s going to do it in writing — he’s going to go to Twitter first. So you know, if you follow Twitter in a programmatic manner, following the president of the United States, you’re going to get a lead on most everyone else.

Ryssdal: This president will either in a year and a half or five and a half years not be president anymore. Then what happens?

Gits: I think there’s been a fundamental shift in how people communicate. I don’t view Twitter as a social media company. I view it as a news source. I think that people are going to continue to use it.

Ryssdal: I’m going to ask you to make a value judgment here, then. Entirely apart from making money, are these algorithms — and the outsized effect that they have on movement of the markets — are they a good thing or a bad thing?

Gits: I think they’re a bad thing in general, because I think the volatility causes a lot of panic by buying and selling and I think the average investor gets hurt it.