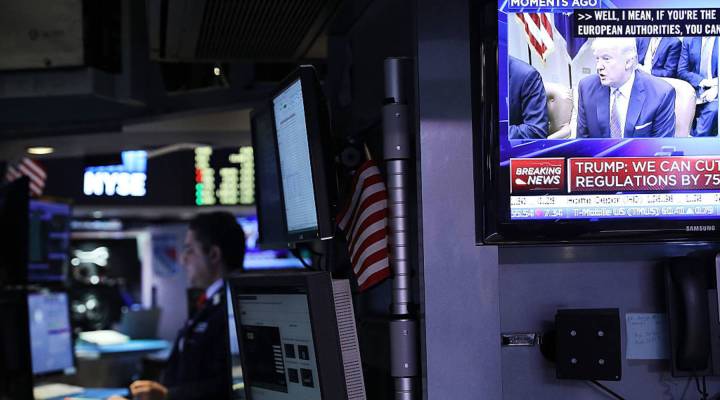 COPY
A television screen shows President Donald Trump as traders work on the floor of the New York Stock Exchange (NYSE) on the first day of trading after Donald Trump was sworn in as president on January 23, 2017 in New York City.    Spencer Platt/Getty Images

A television screen shows President Donald Trump as traders work on the floor of the New York Stock Exchange (NYSE) on the first day of trading after Donald Trump was sworn in as president on January 23, 2017 in New York City.    Spencer Platt/Getty Images
Listen Now

President Donald Trump is famous for his itchy Twitter finger — his willingness to launch social media missiles without warning. And sometimes the targets are publicly traded companies.

His recent tweets about Lockheed Martin and Boeing sent their stock prices reeling, at times wiping out billions in shareholder value. Trump praises companies too, applauding Wal-Mart and General Motors. All this means Wall Street is taking notice and making changes in a bid to stay on top of Trump-driven market swings.

As is often the case with Trump, this behavior is not the norm. Presidents can impact markets generally. But a president willing to call out individual companies, repeatedly and without warning, is essentially unknown. “Certainly in my life, and I’ve been in the industry since 1980, I haven’t seen anything like it,” said Larry Tabb, founder of TABB Group, which tracks technological change in financial markets.

Trump’s Twitter daggers are maddening to professional investors who spend money and time carefully choosing stocks to own, only to see their investments suffer — at least in the short term — following Trump attacks. It’s a frustrating thing, but Wall Street doesn’t wallow in frustration long. Pain on the trading floor drives strategy change, new technology and in this case, even a phrase that’s starting to catch on: “tweet risk.”

Traders monitored social media well before Trump’s election. One of the most high-profile examples of social media’s power to move markets was in 2013, when the Associated Press’ Twitter account reported breaking news: explosions at the White House. The whole market sunk. And then it quickly recovered, once it was clear the AP had been hacked and the report was bogus.

“I remember that day perfectly because it was pure chaos,” said Rachel Mayer, who was working on JPMorgan’s trading floor.

She was part of a group that used algorithms to drive automated trading, long a tool professional investors have used to speed up reaction time. Now she’s CEO and co-founder of Trigger Finance, a tech startup that brings similar tools to regular investors through an app.

Launched last summer, Trigger seems to be catching on. Mayer says there are 25,000 investors using Trigger, who have linked more than $210 million in assets to it. After Trump won, customers started asking for a feature to track his tweets about companies. The company built it and it is now the most popular feature on Trigger, though Mayer warns against making rash trades based on what Trump says.

Setting up automated trading based only on social media is a bit dicey right now. Existing technology doesn’t do a perfect job of understanding human language, as opposed to cold numbers of an earnings report.

“Our language is very complicated and the computers have a hard time figuring out exactly what language means,” said Charles Jones, a finance professor at Columbia Business School.

And it’s even trickier in the abbreviated world of Twitter.

“Most firms, even today, don’t have automated trading strategies based upon social media,” Tabb said. “Mostly what they’re doing is they’re waving big flags out to say, ‘Hey, look something is happening here. Let’s bring a human in to understand what the impact of this is.’”

But of course, investors would love to speed that all up by cutting out the human. Wall Street, software engineers and artificial intelligence researchers are working on that right now. And Trump’s Twitter habit gives them a rich new set of experiments to run.