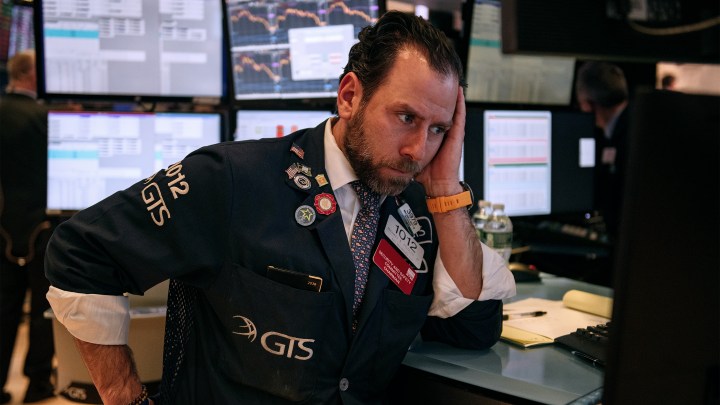 COPY
These days, computers and algorithms have replaced a lot of the action on the floor of the New York Stock Exchange. Scott Heins/Getty Images

These days, computers and algorithms have replaced a lot of the action on the floor of the New York Stock Exchange. Scott Heins/Getty Images
Listen Now

There are a lot of tangible reasons why the market has gone wild — and there are also some emotional reasons. But behind all those fluctuations we are seeing daily — sometimes even every minute — in the stock market is a hard, cold algorithm that’s driving trading.

On days like today, you might imagine the trading floor looks a bit like a scene from the movie “Trading Places.” A sea of traders with a phone to each ear shouting to buy or sell, watching the numbers tick up and down on a giant board. Stock exchanges were really like this.

“Well, it could be very exciting,” said John Steele Gordon, a Wall Street historian. “I mean, on a busy day there were instances where someone would have a heart attack or stroke or something and trading just went straight on. People would just step over the bodies until the medical people could get there and help.”

The New York Stock Exchange even had a gallery so tourists could watch. But it’s closed now, because there’s nothing left to see. In the ’90s, computers and algorithms replaced all the action.

“Basically, what the floor of the NYSE is used for today is the backdrop for television reporters telling the audience what the market did that day,” Gordon said.

“It’s kind of limitless, right?” said Michael Kearns, a professor of computer science at the University of Pennsylvania. “This is what machines are especially good at, which is processing very large amounts of data in a very short amount of time.”

The algorithms react constantly to all the data they’re taking in.

“It’s not surprising that you see these things that feel like overreactions to the news of the last 10 minutes,” Kearns said, adding that if humans were still doing the legwork, we probably wouldn’t see this level of minute-to-minute swing. But we’d likely still see these numbers long term, because behind every algorithm is a human, telling it what to look for.