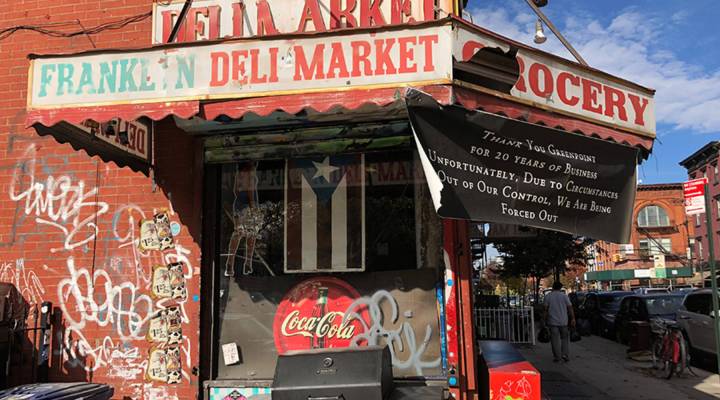 COPY
American Deli Market in the Greenpoint neighborhood of Brooklyn recently closed after about 20 years in business. Janet Babin/Marketplace

American Deli Market in the Greenpoint neighborhood of Brooklyn recently closed after about 20 years in business. Janet Babin/Marketplace
Listen Now

Picture empty storefronts and you might think of a neighborhood or even a whole town in decline.

But in cities across the country, empty shops are proliferating in neighborhoods that are thriving. The phenomenon has given rise to a new kind of “retail desert.”

It’s happening in the Greenpoint neighborhood of Brooklyn, where a corner store and lunch spot called the American Deli Market recently closed its doors after about 20 years in business.

In the deli’s final days, owner Gene Sosa Mejias pointed out the lunch options to Suresh Motie, who works around the corner and said he’s eaten lunch here most days for about a decade.

“Enchilladas, we got yellow and white rice, beans,” Mejias said as he pointed to the steam table.

Motie chose chicken over yellow rice and beans for what would be his last meal at his favorite lunch spot. Mejias said the deli’s closing after the building owner refused to renew the store’s $4,000-a-month lease.

“New York is just becoming too expensive for everybody,” Mejias said. “They take the small businesses out, put the big ones in.”

For now, this space sits empty. The small deli personified old-school Brooklyn in a neighborhood where asking rents for ground-floor retail space have jumped more than 42 percent since 2016, according to GFI Realty Services.

In neighborhoods like Greenpoint, “For Rent” signs can seem more plentiful than “Yes, We’re Open!” placards.

“It feels like every block you walk on has at least one or two empty storefronts,” said Jonathan Miller, president and CEO of Miller Samuel Real Estate Appraisers. “This seems to be a phenomenon in not only New York but in many other metro areas across the U.S.”

Before the financial crisis, overbuilding led to a glut of retail space. After the recession, investors shopped for real estate bargains, said Naveen Jaggi with real estate consultants Jones Lang LaSalle. And they expected big returns.

“But this was right at the beginning of e-commerce transforming the way consumers shop,” Jaggi said.

Jeremy Metz, with BMO Capital Markets, said many empty spaces persist because landlords are still being unrealistic about the rents they can collect.

“You’re actually seeing the authentic, the local entrepreneur or retailer who can’t afford some of these rents and is getting pushed out,” he said.

New York and San Francisco are among the cities considering laws that would levy taxes on landlords whose shopfronts remain vacant. Metz said some landlords have begun to lower rents and offer shorter commercial leases.

Other landlords care about the vibrancy of the tenants in their shopfronts. Metz said a desirable retailer can attract upscale tenants to the rest of the building.

The question for those landlords is “How do you curate that space?” he said. “Because that can have an impact on what you are leasing above.”

Metz said these “curated” stores are bringing green shoots to some retail deserts.

Clover Grocery in Manhattan’s West Village is one example. It’s a tiny gourmet/drug store in a space that used to be an eyewear shop.

It sells $10 charcoal toothpaste, $30 nontoxic candles and $15 vegan condoms — one of its more popular items, according to co-owner Kyle Hotchkiss Carone.

“I bet when people read that we sell vegan condoms, they Google, like, ‘What’s the matter with regular condoms?'” he said.

When the store first opened, Carone said some neighbors complained that it was too pricey and would force local bodegas out of business.

Carone said he told them, “We’re just, like, entrepreneurs trying to bring some life back to a neighborhood. We’re not, like, the devil. At least it’s not a vacant storefront.”

Carone signed a 10-year lease on Clover Grocery’s space. Meanwhile, the landlord for the building where American Deli used to be said she’s looking for a new tenant that “caters to the neighborhood” — rising rents and all.