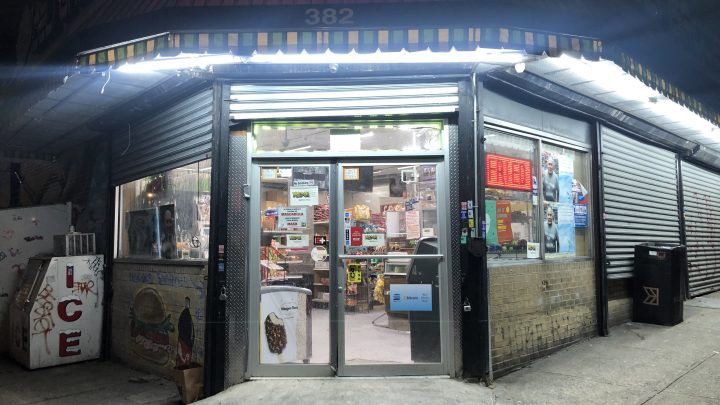 COPY
Francisco Marte's bodega is a lifeline for many in his Bronx community. Jasmine Garsd/Marketplace
COVID-19

Francisco Marte's bodega is a lifeline for many in his Bronx community. Jasmine Garsd/Marketplace
Listen Now

When Francisco Marte was a teenager, a friend of his family offered him a job at a bodega in the Bronx saying, “You can have it — if you can survive it.”

Bodegas sell groceries, toilet paper, batteries and these days, face masks. There’s not a lot of space in New York city for super-sized grocery stores, so New Yorkers rely on these small convenience stores on almost every corner. There’s about 15,000 of them, and they’ve been deemed “essential businesses” during this pandemic.

These stores have always been a lifeline for many neighborhoods. So when Marte was offered one, despite a wave of crime and violence, “I said to him, on the spot, ‘Sure, give it to me,” he said in Spanish.

It’s hard to imagine Marte as a tough guy. He’s now in his 50s, with a sweet, mischievous smile. But back then, he was robbed, beaten and has even been shot. He made it. And what Marte said he learned in the process is that the bodega is about more than getting a cheap coffee, a box of cereal. The bodega is and always has been about survival and community. “We are the listeners. A lot of people come with their problems to talk to the bodega guy.”

I met Marte over the phone, at the onset of the pandemic, and we spoke about how hard it was to stay afloat. I decided to spend some more time with him in December, so on a weekday morning, I headed to his store in the Bronx. He invited me behind the counter, where he holds court with customers whose jackets are so puffy, they can barely get through the narrow store aisles — which have been hard to keep stocked lately.

“There was a time when I couldn’t even get toilet paper or napkins,” Marte says. “Now they only give each bodega five packs at a time.”

As of a few months ago, parts of the Bronx experienced unemployment higher than 20%. Sales at the bodega have just plummeted.

Soon a young Dominican man named Leo Mejia stops by. He’s a distributor, among other things, of Coco Rico, a Puerto Rican soda.

Mejia looks gaunt under the fluorescent light, and he tells me it’s his first day back on the job after having COVID-19.

Mejia says he was surprised to find that four of the bodegas he used to deliver to have shut down. That’s a problem, since he earns on commission.

“There’s bodegas that haven’t asked for service in over a month.”

While we speak, a man in a wheelchair bursts through the door, excited, and yells: “They’re giving the stimulus out!”

Gregory Manning, a regular, has just gotten his $600 stimulus payment. But that money, he says, is not going to be spent at the bodega.

“Basically, everybody’s going to be paying bills,” Manning says. “Ain’t nobody gonna be buying nothing new.”

As the guys celebrate, an older man walks in. He asks to speak to Marte privately. After he leaves, Marte tells me the man asked him for a $20 loan. He says this is happening more often. So is what’s called “dar de fiado” or “putting it on the tab.”

“I won’t give beer or cigarettes or stuff like that,” Marte explains. “But if it’s milk, a soda, something to eat, yes, I’ll put it on your tab. These are people I’ve known for a long time.”

Bodegas are often microloan institutions. For Marte, it comes at a cost. He’s lost a lot of income. The elementary school next door is temporarily closed. The gym across the street is empty. He’s let go of most of his employees and had to rely on a $22,000 Paycheck Protection Program loan.

The Partnership for New York City estimates that roughly one-third of the city’s small businesses may not survive the pandemic.

But it’s not all doom and gloom. Marte urges me to stay a while. Because, at night, this bodega moonlights as a sort of social club, where neighbors meet for beers and dance.

Armando Poveda, an Ecuadoran taxi driver, tells me he used to drive people to work on Park Avenue, but that’s mostly dried up.

For him, one of the hardest parts of the pandemic is “loneliness. An ugly loneliness.”

But he says here, on aisle two, for a moment in time, it’s not just you surviving by yourself.