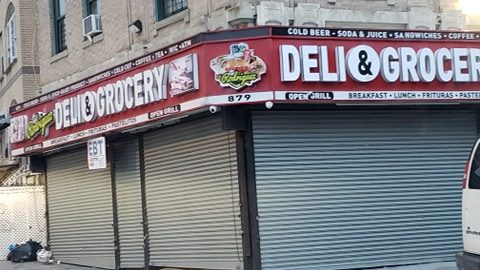 Six weeks ago, Miguel Baez, who owns the Bodega Gourmet Deli in the Bronx, noticed something alarming. The cashier and the deli attendant were coughing incessantly and telling him their bodies ached.

Then he found out one of the guys who worked at a nearby market died of COVID-19.

And so Baez closed his bodega, which he said is one of the main food suppliers in his neighborhood.

In New York City, these small shops sell everything from chopped cheese sandwiches to cartons of milk and rolls of toilet paper. Some neighborhoods depend on them as main suppliers of essential goods, especially in low-income communities, said Karan Girotra of Cornell University.

“Big chains and others don’t find [these neighborhoods] profitable enough to sell. And the small kind of store has filled in that gap,” he said.

In New York, the Bronx is among the hardest hit areas by COVID-19. Francisco Marte owns three bodegas in the Bronx, and he heads up the Bodega and Small Business Association in New York.

“People come to hang out at the store when they leave work, when they have some troubles to discuss,” he said.

But that closeness has become a liability. Hundreds of bodegas in Marte’s association have had to close.

Earlier this week, lawmakers set aside an additional $310 billion in aid to small businesses.

Baez, the owner of Gourmet Deli, has not applied for any loans. He’s heard from other owners that the process is a bureaucratic nightmare. But he’s thinking about asking for help now.

“It’s been chaos,” he said. “Electrical bills and rent are still due. Food has gone bad.”

But he thinks back to the ’80s, when he was a teenager, and he moved from the Dominican Republic to the Bronx.

He got his first bodega at a discount because it was such a rough neighborhood.

He was robbed, got into fistfights, and he was shot. But he’s still a bodeguero, and says he’s here to stay.