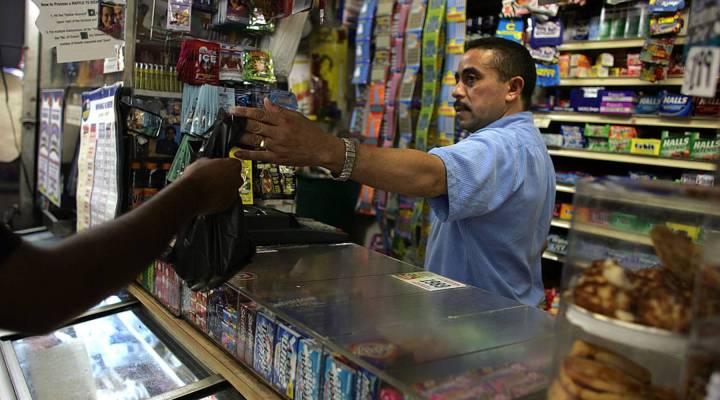 On the first Thursday of February, New Yorkers were met with an unusual sight: closed bodegas. As thousands of New York’s bodega owners shuttered their doors to protest President Trump’s immigration ban, New Yorkers had to turn elsewhere for their lunch, daily dose of nicotine and lottery tickets.

It was a small sacrifice to make in order to support a community of immigrant business owners who have seen us at our worst — including when sick, drunk, or hungover. They serve us our first coffee and our post-hangover Gatorades. They know how we like our sandwiches. Their neon lights illuminate our streets 24/7, showing us the way home to our tiny shoebox apartments.

In cities like New York or Los Angeles, bodegas are a cornerstone of communities. So imagine the shock when a West Coast-based startup announced on Wednesday it was rolling out a five-foot-wide high tech vending machine with a limited range of nonperishable items and calling it … Bodega. As of this morning, about 50 have been placed in apartment buildings, offices, dorms and gyms across the Bay Area so that those in need of certain items don’t have to trek to the corner store. Paul McDonald, one of the co-founders of the company, hopes that by the end of 2018, there will be more than a thousand “Bodega” boxes across the U.S.

To buy anything from the box, you will need to use an app and the box’s smart technology, which will recognize the items you selected and automatically charge your credit card for them. There is no friendly cashier or bodega owner to ask you about your day, just you, your phone and a box of nonperishables.

While the concept is nothing new, vending machines selling nonperishable everyday items, and even clothing have been around for some time, branding the box “Bodega” has struck a nerve. Wasting no time, Twitter seemed to respond to the news in unison to say: Thanks, but no thanks. This is a box and a not a bodega.

does your invention make bacon, egg and cheeses tho #bodega

This Bodega thing is so stupid. Can it make me a Chicken parm on a roll and can I buy my scratch offs with it?

True story – the guys at my bodega took such good care of me, I got them a Christmas gift.

Bodegas in New York City don’t need to be ‘disrupted’ bro. I want my chopped cheese with the full experience, bodega cat and everything guy

My bodega guys keep an eye on me in a neighborly way. They know when I’ve had a rough day & always have what I need to turn things around.

I love being a bodega regular. The ladies yell when I go on vacation and don’t tell them. ? https://t.co/pEpmzVvh8W

During my loneliest days in NY, it honestly meant so much to me to go to my bodega and see the kind faces of the owners and pet the cat.

So, why not call it what it is — a pantry box or a vending machine?

The name really is a marketing move to capitalize on something that most urban dwellers (read millennials) are familiar with. Whatsmore, the founders do not think calling their box of nonperishable items a bodega is culturally insensitive.

“I’m not particularly concerned about it,” McDonald told Fast Company, which first reported on the startup. “We did surveys in the Latin American community to understand if they felt the name was a misappropriation of that term or had negative connotations, and 97 percent said ‘no.’ It’s a simple name and I think it works.”

Not everyone agrees. Some Twitter users even came up with alternate names for the business such as “bro-dega” and “gentrification box.”

lol “brodega” is perfect and I would never ever ever shop at one of these over my local bodega. In fact I hate this. https://t.co/n1O1Ow5FbI

So this Bodega startup is vending machine, except it’s just a box with a lock on it. The size of a sideboard. ?‍♀️

The company has also been accused of cultural appropriation by Frank Garcia, the outgoing chairman of the New York state coalition of the Hispanic Chamber of Commerce.

“Why are you using the Hispanic name – why are you doing that?” Garcia said in an interview with Metro newspaper. “My grandfather must be rolling over in his grave right now. When a bunch of Puerto Ricans starting calling [their stores] ‘bodegas,’ they didn’t intend them to be vending machines. The intention was to support immigrants.”

In a Medium post published later on Wednesday, McDonald noted that he and his co-founder might not have fully understood the reaction that the name of their startup would evoke.

“When we first came up with the idea to call the company Bodega we recognized that there was a risk of it being interpreted as misappropriation. We did some homework — speaking to New Yorkers, branding people, and even running some survey work asking about the name and any potential offense it might cause. But it’s clear that we may not have been asking the right questions of the right people,” he wrote.

McDonald apologized to anyone who was offended by the name and promised to “review” the feedback the company has received.