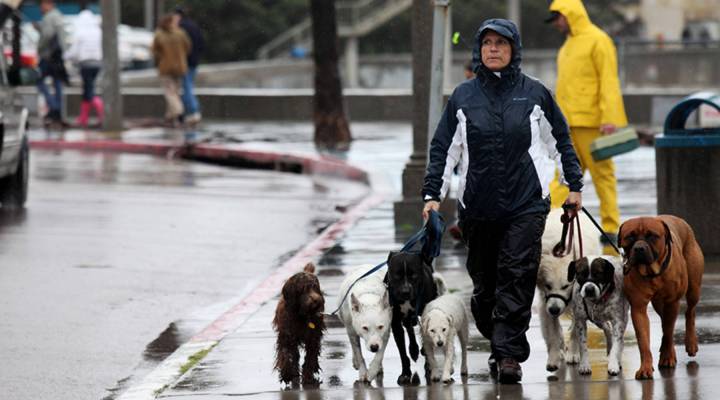 Dog Walker Dorothy Agius-Bennett takes her pets for a stroll during a powerful rainstorm on December 21, 2010 in San Diego, California. Sandy Huffaker/Getty Images

Dog Walker Dorothy Agius-Bennett takes her pets for a stroll during a powerful rainstorm on December 21, 2010 in San Diego, California. Sandy Huffaker/Getty Images

At the end of every month, the Bureau of Labor Statistics releases an updated percentage estimating how many Americans are unemployed. But the question always comes up, what exactly does employed mean?

Say you’re a part-time barista, part-time Uber driver, when-you-really-need-the-money-time IKEA-furniture-assembler, what kind of employed are you? Don’t worry, you’re not the only one asking the question: The Bureau of Labor Statistics is confused too.

The BLS’s Contingent Worker Supplement has attempted to answer the question since 1995. It tries to measure the workforce of temporary employment and independent contractors. And in 2017, the BLS felt the need to identify a new group: gig workers. Data from the 2017 survey made it seem like the gig economy was shrinking. But shrinking compared to what? This survey was last run in 2005 and back then, “uber” was just an adjective. Apps and online platforms have transformed the nature of work, especially temporary work since 2005. So the BLS tried to measure that change by adding four new questions to their survey to measure “electronically mediated work.”

Which kinda covers gig work? The Bureau defines electronically mediated work as “short jobs or tasks that workers find through websites or mobile apps that both connect them with customers and arrange payment for the tasks.” A bit confusing, right? The respondents thought so too so the survey results yielded a bunch of false positives. One surgeon claimed they found work through a website or mobile app and a hairstylist responded affirmatively that they completed work entirely online. Let’s hope not.

So what is this “electronically mediated employment”?

See if you can figure it out yourself: We’ve pulled a few hypotheticals from the BLS report on electronically mediated employment to create a short quiz at the bottom of the article.

Still confused? Don’t beat yourself up, the BLS admits that their survey questions on electronically mediated employment were harder for some folks than others. They found familiarity with the concept of gig work is based on proximity, so for example taxi drivers were “able to answer the questions more easily than people in occupations that have few electronically mediated workers, such as school teachers or firefighters.”

Because of all the confusion over the definition, estimates of how many Americans take part in non-full time work vary greatly. The Bureau of Labor Statistics estimates 5.9 million contingent workers (3.8 percent of total employment). A study from Upwork, a platform for finding freelance work, finds that 57.3 million Americans do freelance work (that’s 36 percent of the U.S. workforce). Two professors following the rise of alternative work arrangements found the percentage of workers doing this type of work went from 10.1 percent in February 2005 to 15.8 percent in 2015. That’s a lot of estimates.

But the definition, according to Sarah Kessler, reporter and author of “Gigged: The End of the Job and the Future of Work,” is not really the point. She says ride-share driver or independent contractor, “either way they don’t have benefits, they’re not protected by most labor laws.” That’s because “basically anything that we’ve [made] to create a social safety net, we’ve attached only to employee status, and not to anyone else.” And we’re not just talking about health benefits: if you’re harassed on the job, if you’re underpaid or wrongfully let go from gig or freelance work, labor laws don’t apply.

To try to address that need, a number of services have popped up that provide everything from disability insurance for freelancers to a chat line providing support for workplace issues. But while these services try to fill in the gaps, they can’t make up for traditional employee protections. Getting those protections may be just be one more task to complete for the freelance and gig workers of America.

A few resources for gig workers: