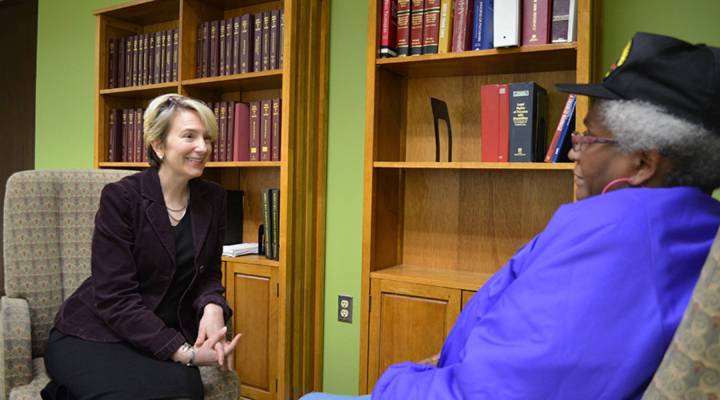 Twelve years ago, Jill Williams had a stroke that left her unable to work. She ended up homeless, living between shelters and her car. Then in 2016, she received a Section 8 housing voucher for veterans. She’d served in the Coast Guard.

“After 10 years of homelessness and being on the street, it was a tremendous help,” Williams said.

But when she tried to use the voucher, Williams said, she “traveled to several apartment complexes, and constantly heard the word, ‘no.’”

Fifty years ago Wednesday, President Lyndon Johnson signed the Civil Rights Act of 1968. It’s also known as the Fair Housing Act, because the law made it a federal crime to deny housing based on a person’s race, color, religion or national origin. Since then, protections for gender, disability, and families with children have been added. But housing advocates say another form of discrimination is still a barrier for many low-income people. In Baltimore County, Maryland, and much of the country, it’s legal for landlords to turn someone down based on their source of income.

“We see this as, essentially, one of the last frontiers of ensuring that people have access to fair housing,” said Antonia Fasanelli, executive director of the Homeless Persons Representation Project in Baltimore and Williams’ lawyer.

Landlords say denying a voucher is not discrimination.

“This is all about the governmental bureaucracy that comes with taking a voucher, as opposed to any other issue,” said Adam Skolnik, executive director of the Maryland Multi-Housing Association, which represents owners and managers.

Landlords who accept vouchers face onerous inspections and paperwork, Skolnik said. The public housing authority determines how much rent they can charge. That hasn’t stopped Skolnik from accepting vouchers at his own buildings.

“I love the income stream, I’ll admit that, and I find it worth dealing with the agony,” he said. “But that’s why our association thinks it should be somebody’s choice.”

Jill Williams eventually did find a place to live. Driving out to see it with Fasanelli, we passed several complexes where she said her voucher wasn’t accepted.

She’s 59 years old now. Her gray ponytail poked out of a Coast Guard cap that had the words “Woman Veteran” on it. Outside her ground floor apartment in a large brick complex, the grounds look neatly kept. But she’s had complaints about the building’s maintenance and said she doesn’t feel safe going for walks. The neighborhood is also far from her family.

“It was disappointing because I couldn’t live where I wanted to live,” she said. As an African-American, Williams said, “I just never thought that I would find income discrimination as well as, at my age, having experienced discrimination because of my color.”

She hopes to move to Annapolis, Maryland’s capital, so she can advocate for the homeless. And because there, discrimination based on source of income is prohibited.