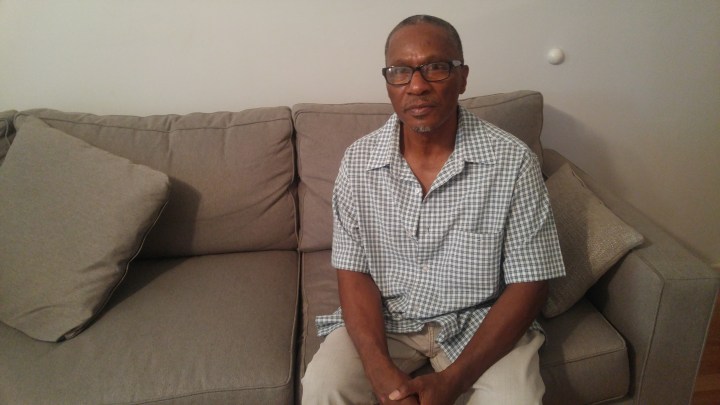 COPY
Johnny Washington in his new apartment in a Chicago suburb. He graduated drug court and got a Section 8 voucher. Natalie Moore for Marketplace

Johnny Washington in his new apartment in a Chicago suburb. He graduated drug court and got a Section 8 voucher. Natalie Moore for Marketplace
Listen Now

Johnny Washington can’t remember the last time he lived in his own apartment. He’s struggled with heroin addiction for nearly 50 years and he’s been in and out of prison over the last 15 years.

Washington, 66, has been working in shipping at a candy factory since the beginning of the year. But the real stabilizing force in his life has been the apartment in suburban Chicago where he’s lived since July. It’s the best he’s felt in a long time.

It took him awhile to get here. Two years ago Washington landed in the Cook County Drug Court Program. It’s a special court created for nonviolent offenders struggling with substance abuse. The focus is on treatment, not criminalization.

The court put him in a residential treatment program for people exiting the criminal justice system. But he could only live there temporarily, and time was running out.

“I couldn’t find anything because everywhere I went they wanted high credit scores and my credit scores weren’t that high,” Washington said. Homelessness threatened to upend his recovery.

Then Washington got a call from Cook County Judge Charles Burns this summer with good news. Washington had qualified for a housing voucher in a new program with the Cook County Housing Authority. He pays 30% of his income toward rent; the county picks up the rest. Burns, who oversees the drug court, said 49% of people who enter the program have no housing.

Burns said the voucher program is “an opportunity not only for them to get vouchers, to get clean in stable housing, but to get them out of the neighborhoods — the neighborhoods that had been sucking them in and being like quicksand where they couldn’t get out of this lifestyle.”

This summer, the Metropolitan Planning Council and Illinois Justice Project released a report about how the state could save millions of dollars if it did more to help people leaving prison find stable housing.

“When we did this, we asked ourselves to what degree would better housing allow people to have better lives and be more successful?” King Harris, one of the authors of the report, explained. The researchers also wanted to know if it would help curb recidivism.

“I was a convert on day one because we have a very scarce resource here in housing assistance. Here you had people who really need it and if they get it are very likely to succeed. So marrying those two concepts made a lot of sense,” Monocchio said.

CCHA issues 15,000 Section 8 housing vouchers to low-income county residents every year. Now 25 of them are going to drug court graduates. If the pilot program is successful, it could be expanded. Johnny Washington is the first recipient, and he said it’s helping to keep him sober.

“Since I’ve been clean, I’ve been reconnecting with my kids, my family,” Washington said.