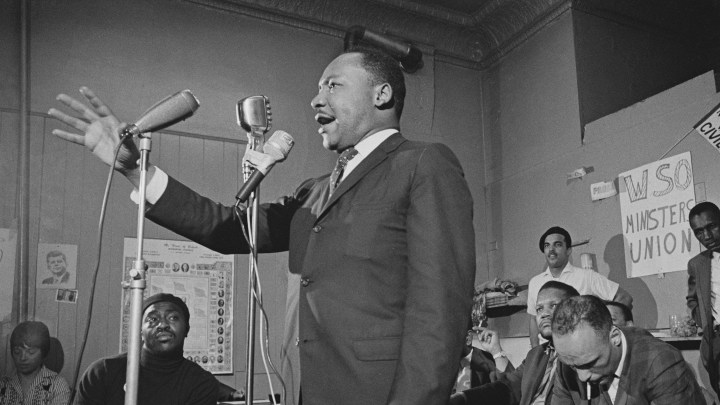 COPY
Congress passed the Fair Housing Act after Martin Luther King Jr.'s assassination in 1968, as a way of honoring him. Above, King addresses a meeting in Chicago in 1966. Jeff Kamen/Michael Ochs Archives/Getty Images
Race and Economy

Congress passed the Fair Housing Act after Martin Luther King Jr.'s assassination in 1968, as a way of honoring him. Above, King addresses a meeting in Chicago in 1966. Jeff Kamen/Michael Ochs Archives/Getty Images
Listen Now

The Fair Housing Act was introduced in 1966, thanks to pressure from Martin Luther King Jr. and other civil rights leaders. But for two years, the bill went nowhere.

“When that bill died in Congress, a bit of democracy died,” King said in a 1967 speech at Stanford University. “A bit of our commitment to justice died.”

Then on April 4, 1968, King was assassinated in Memphis, Tennessee. Amid the public outrage that followed, President Lyndon Johnson pushed Congress to pass the legislation in King’s honor.

“It was only because of Dr. King’s assassination that that bill was passed, days later,” said Katrell Lewis, director of advocacy with Habitat for Humanity New York City. “Fair housing was something that he also literally died for.”

More than 50 years on, fair housing advocates say the law has been weakened. Last year the Trump administration repealed an Obama-era rule called Affirmatively Furthering Fair Housing as part of its push for deregulation. The rule had required local governments to develop plans to address housing segregation or risk losing federal aid.

Under President Donald Trump, the Department of Housing and Urban Development also passed a rule making it harder to prove that a practice is discriminatory if it has a “disparate impact” on protected groups, like when a landlord rents only to people with full-time jobs, which could disproportionately exclude Black applicants.

“The Trump administration kept up a drumbeat of really attacking and eviscerating our fair housing laws,” said Lisa Rice, president and CEO of the National Fair Housing Alliance.

She expects the incoming Biden administration to restore those protections.

“The Biden-Harris administration has said that it wants to place racial equity at the top of its agenda,” she said. “You cannot have racial equity in the United States without disparate impact and without affirmatively furthering fair housing.”

Rice acknowledged there will be a lot of urgent issues competing for the new government’s attention, like addressing the pandemic that has especially hurt people of color — in part because of segregation.