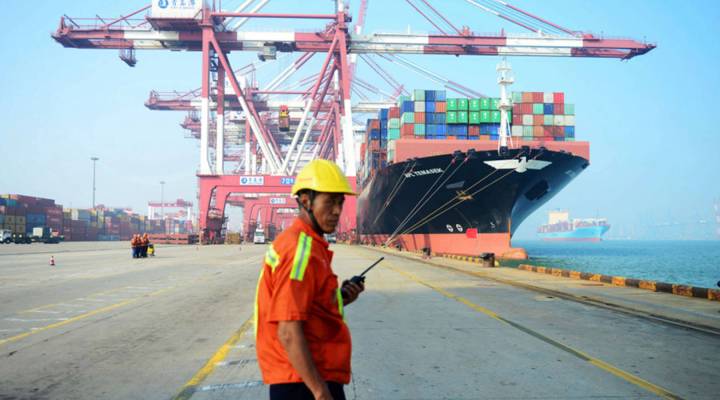 COPY
A Chinese worker looks on as a cargo ship is loaded at a port in Qingdao in eastern China's Shandong province in July.
Trade showdown

A Chinese worker looks on as a cargo ship is loaded at a port in Qingdao in eastern China's Shandong province in July.
Listen Now

Right out the gate, let’s set the record straight: Threats have been made and specific items have been listed, but no new tariffs have been put into effect. But what does it all mean for the economy? Let’s break it down.

The fundamentals of an American economy:

We’re in a pretty good position right now: Consumer confidence is strong, unemployment is at 4.1 percent, wages are steadily ticking up and some companies have even been in a bonus-giving mood. But what happens to all of that if this trade war becomes a reality? Let’s talk gross domestic product and jobs.

A game of macroeconomic chicken:

All the talk of a possible trade war between China and the United States could go nowhere — both sides could back away from this game of chicken. We have learned to take President Donald Trump’s tough talk and discount it a few basis points in reality. You may remember those steel tariffs that in the end contained many loopholes for many countries. So with China and trade, what might backing down and negotiating actually look like?

But what about soybeans?

Assuming that neither side blinks in this looming trade war between China and the United States, the American soybean industry is in trouble. China is the biggest buyer of American soybeans; about one out of every three soybeans that comes out of the ground in this country gets shipped there. It’s the highest valued product, after airplanes, on the Chinese tariff list. And tariffs on American soybeans could have a ripple effect throughout the U.S. economy.

Click the audio player above to hear the whole story. Still have questions? We do, too. Click here to check out some reader-submitted questions and our answers to them.