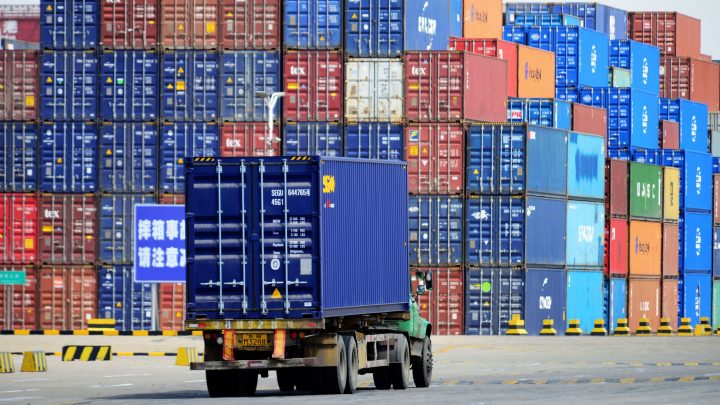 It all started with tariffs on washing machines and solar panels in January 2018. Since then, tariffs have been slapped on virtually every import from China, from steel and aluminum to live animals and clothing.

But what if the trade war never happened?

That’s what “Marketplace” host Kai Ryssdal asked Christine McDaniel, senior research fellow at the Mercatus Center at George Mason University. Although the answer is limited to speculation, a little economic theory can help us imagine where the global economy might be today if there wasn’t a trade war. The following is an edited transcript of their conversation.

Kai Ryssdal: So we should say before the president kicked in with his tariffs — and let’s reference this as the steel and aluminum tariffs of a year and a half ago, just as a starting point — the general business and economic environment that he had engendered was reasonably pro-growth.

Christine McDaniel: It was. He walked into, you know, a party that was getting ready to go pretty strong. Things are looking, starting to look different now.

Ryssdal: Well, let’s talk about what happens had he not, back in the early days of 2018, said, “Let’s put some tariffs on.” What are the things that tick through your mind when I say, “What if?”

McDaniel: So one thing I think we should all keep in mind, though, is that the U.S.-China trade tensions have been there for a long time. But if he wouldn’t have done the tariff road, I think the [Federal Reserve] might not feel under — I’m not saying that they do feel under pressure, but —

Ryssdal: Well, there’s certainly the perception of pressure. Chair [Jerome] Powell says all the time, “I’m just doing my job,” but you know, pressure is pressure.

McDaniel: Right, they wouldn’t feel this pressure to stave off the ill effects of these escalating tariffs, because the escalating tariffs do have an effect on U.S. manufacturing, and the retaliatory tariffs do have an effect on ag. And all these things play into U.S. economic growth, and unemployment, and inflation, and all the things that the Fed looks at. Had it not been for these tariffs, that part of the equation wouldn’t be there. Now, they would be under other pressure, obviously, you know, global issues. Brexit was going on, you know, regardless of the tariffs. It looked like China was maybe slowing down anyway. But this definitely seems to have sped things up and exacerbated the bad parts of all of that.

Ryssdal: Let’s take some sort of geopolitical context and roll it in here. The president has been mercurial in who he’s going to tariff and how he’s going to tariff them and when they get tariffed. Talk to me about — and maybe this is outside your area of expertise — but relations with our allies and the rest of the global economic community.

McDaniel: I think the tariff approach has eroded trust, right? It’s not just tariffs on China, it’s, you know, it’s threats of tariffs on autos, using tariffs for other purposes. So you look at the [European Union], I mean, we want a lot of other things from the EU. We want ag market access, regulatory cooperation. But are the EU leaders willing to expend that when, you know, after all that work, then they could just get threatened with auto tariffs the next day?

Ryssdal: All right, so here’s the $64,000 question, and I get that it’s kind of unknowable. But if we had not been in the middle of this trade war, would people be talking about a recession as much as we are?

McDaniel: It’s hard to tell. There are other global factors. I think of Germany, right? Germany is one of those countries when their big export markets sneeze, they get the flu. And when they get the flu, Europe comes down with pneumonia. So what we’ve done is really taken a big shot at a big country in Europe when they were already dealing with Brexit, and already dealing with potential China slow down, and we sort of gut punched them when they were starting to slow down anyway. So that’s an example of where you think, “Well, if it’s just the tariffs,” but it has this sort of cascading effect. Europe, once they slow down, it takes them a long time to get back up.