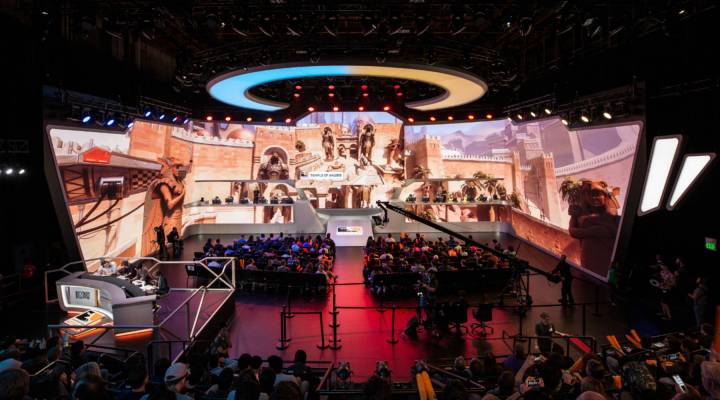 COPY
A view of the Blizzard Arena. Robert Paul for Blizzard Entertainment

A view of the Blizzard Arena. Robert Paul for Blizzard Entertainment
Listen Now

According to the video game market research company SuperData, one in three people on the planet play video games on their computer or phone. That’s two and a half billion people. And esports — competitive video game playing — has exploded over the last couple of decades. It’s now a $1.5 billion business.

At Blizzard Arena in Burbank, California, a lot of (mostly) young people sit staring at a massive video screen overhead. They’re watching two teams of six professional players battle each other in a video game called “Overwatch.” The players direct online heroes who must save their world from chaos. It’s loud, and the camera angles are fast and unsettling, but the audience follows it seamlessly. Most don’t know (or care) that they’re sitting in the very sound stage where Johnny Carson and Jay Leno filmed ”The Tonight Show” for more than 40 years — they’re totally consumed with what’s happening up on stage.

Devon Reynolds and a few friends drove down from Seattle and just got into town.

“We actually drove 19 hours to get here, straight,” he said. “One or two stops for gas, that’s about it.”

Reynolds plays “Overwatch” at home — a lot. He’s 20 and studying psychology in college, but says he really wants to be a professional esports player.

“That’s eventually the goal,” Reynolds said from the lobby of Blizzard Arena during halftime of an “Overwatch” match. “I’m working on coaching or playing for a team and working our way up, so this is a great experience. I get to see how the players interact, and how much they’re talking, and which players talk the most and things like that. It’s very interesting to see for me.”

It’s interesting to Reynolds and his friends, but they play the game and could be classified as super fans.

The audience looks on during an “Overwatch” match.

So what’s the wider business model for the Overwatch League?

“Everything is kind of flipped in a weird way, and the endgame, therefore, is a little murky,” he explained.

NFL franchises, for example, make big bucks — more than half of their revenue — from TV deals, not so much from building and maintaining stadiums.

Activision Blizzard, the company that owns “Overwatch,” calls itself an entertainment company, but at its core, it’s a video game producer. Johnson said the folks at Blizzard just need to keep selling games.

“They need to have players keep getting excited about this game,” Johnson said. “In Blizzard’s mind, that’s all you need to be a big cash generator for a pretty infinite amount of time.”

Johnson said Blizzard hopes these live events help. But 10 million people around the world watched the first week of the Overwatch League online. “Overwatch” already has a captive audience. And Blizzard’s already monetized ads on those live streams. For a video game competition, the in-person experience seems secondary.

“Blizzard is deciding to take this way further, and as a result, they’re putting way more on the line, including buying their own arena,” Johnson said. “And they’re trying to make this as big and as mainstream as possible.”

These days, all “Overwatch” esports games are played in Burbank. But the plan is that the games will be played in the 12 franchise cities, like in traditional sports. Nate Nanzer, commissioner of the Overwatch League, admitted his league is borrowing from the traditional sports model in the hopes that it’ll create new sources of revenue.

“If you’re a local auto dealer, you have no reason to sponsor a global esports league,” Nanzer said. “But if there’s a team in Dallas, a team in Houston, a team in Boston, you might actually have a reason to get involved.”

Lots of kids dream of playing professional sports: quarterback of the Dallas Cowboys or center fielder for the Yankees, for example. Some kids still have those dreams. But many others, like 16-year-old Tyler McCormick, think esports are the future.

“Me and my friend, Adrian, ran from school today,” he said. “Right as we got out of school, we sprinted here. It’s unimaginably fun.”

Esports are already mainstream in places like China and South Korea. Here in the U.S., big names like Robert Kraft, owner of the NFL’s New England Patriots, and Stan Kroenke, who owns the Los Angeles Rams, have been investing in teams. It seems the growth of esports in America is inevitable.

Take me out to the video game, anyone?