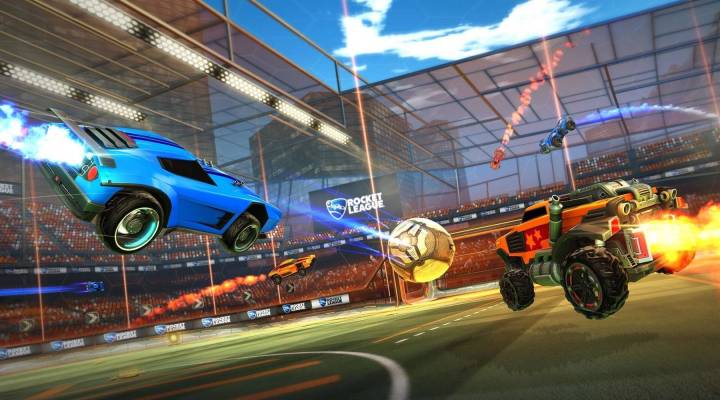 For its first esport tournament, NBC has chosen Rocket League — a video game where cars instead of people play soccer.  Courtesy of Psyonix

For its first esport tournament, NBC has chosen Rocket League — a video game where cars instead of people play soccer.  Courtesy of Psyonix

If there were any lingering doubts about whether video game tournaments were becoming a mainstream phenomenon, today those doubts were dispelled.

NBC Sports Group, part of media giant NBCUniversal, has announced it will launch an esport tournament of its own. Participants will compete in regional, national and international rounds. More than 40 hours of coverage will be available via live-streaming and video-on-demand. The game chosen for the inaugural tournament, Rocket League, pits players, as vehicular avatars, in a soccer match.

Even as viewership for traditional sports such as baseball, basketball and football have steadily declined, esports numbers have gone in the opposite direction. Esports, short for electronic sports, are competitions where professional gamers publicly play against each other. The global audience for esports is expected to reach 385 million this year, according to market research firm Newzoo. About 191 million of those people are dedicated esports viewers while the other 194 million people are considered “occasional viewers.”

NBC Sports hopes that by tapping into the esports market, it can attract new viewers. According to NBC Sports, Rocket League, developed by Psyonix, has a community of more than 32 million players.

NBC Sports is not the only company that views esports tournaments as a way to grow its business. Earlier this month at the Electronic Entertainment Expo, E3, in Los Angeles, Intel announced that it was expanding its partnership with ESL Gaming and Oculus to launch the VR Challenger League, a global gaming competition that is slated to kick off in July. Intel is pursuing virtual reality opportunities in esports, noting that it expects the audience for video game tournaments to grow to around 500 million people by 2020.

During last year’s Olympic games in Rio, competitive gamers from around the world gathered for a tournament of their own. At the time, the number of esports fans was estimated to be about 150 million.

Esports tournaments are nothing new. Back in 2013, Marketplace interviewed the organizers of Major League Gaming, which was not only organizing competitive gaming events but also ensuring that players from around the world would be able to attend. That year the organization was able to convince the U.S. Citizenship and Immigration Services to issue athlete visas to professional gamers.

“Fourteen million people tune in to the All-Star Weekend. And when they have a championship event, they are going to have 15,000 to 20,000 people in the room, and those people are there to see not only the game being played, but also the players,” Sundance DiGiovanni, CEO of MLG, said at the time. “Bringing them in from Europe and bringing them in from Asia is a key component to that.”

The future of sports, at least when it comes to lucrative audience numbers, might just be video games. At least that is what NBC and Intel are betting.