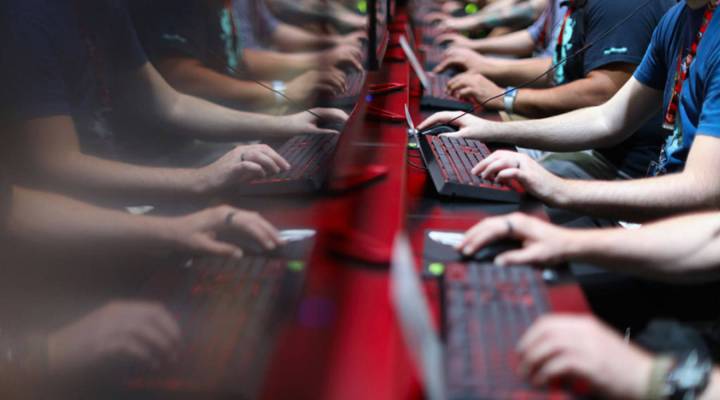 Gamers compete at the Nvidia booth during the Electronic Entertainment Expo at the Los Angeles Convention Center in 2017. Christian Petersen/Getty Images
Listen Now

This week’s shooting in Jacksonville, Florida, was broadcast live on Twitch, the streaming platform acquired by Amazon for a billion dollars in 2016. Two people were killed while they were competing in a Madden NFL video game tournament. The shooter later killed himself. Twitch has removed video of the shooting from its site, although it’s still available elsewhere online. Twitch also announced stepped-up security for its annual TwitchCon gathering in October. Electronic Arts, maker of the Madden video game, said it’s canceling three upcoming esports events.

Live streaming platforms of all types are struggling with how to handle acts of violence. The entire business model of esports is built on live streaming competitive video game play. Molly Wood spoke about the possible response from the esports industry with Dmitri Williams from the USC Annenberg School for Communication and Journalism, starting with establishing its rapidly growing audience. The following is an edited transcript of their conversation.

Dmitri Williams: The most popular esports events actually draw a larger crowd than, say, the NBA Finals. They can be very popular, especially for the big sort of culminating events. But there’s also a steady stream of many, many hundreds of esport streamers and smaller events going on all the time.

Molly Wood: Right. Facebook has certainly struggled with how to deal with violence and people specifically live streaming violence because they want a huge audience. And so I wonder, how should Twitch be approaching the possibility that someone’s going to say, “Hey, here’s a built-in audience of 10 million for an act of violence that I would like to perpetrate?”

Williams: So we want to avoid perverse incentives. And, of course, any time you can attract a lot of people, that means you can attract advertising dollars. But you don’t want to incentivize violence or just any kind of content. But the same thing has been true of traditional broadcasters as is now true of this more Wild West atmosphere of this new platform, which is, “Do we have some kind of responsibility for the kind of content that we’re going to put on our airwaves?” And who is we? Because in this sense, this is almost more like an Uber model where they’re outsourcing the content creation. This isn’t a centralized broadcaster who’s doing polished broadcasts. This is someone who creates a platform and says, “Hey, anybody can use it,” almost analogous to someone using telephone lines. And should the telephone company be responsible for it? We’re in a very blurry area where the law certainly has not caught up to the technology. Surprise, surprise.

Wood: What do you think that looks like technologically? Like, time delay, more like TV? Or some other regulations? Because it’s sort of like broadcast, but it’s also totally unregulated in ways that broadcast is not.

Williams: I think you can expect that the more corporate money gets involved and the more heavily sponsored these things are, the more it will tilt towards looking like televised golf or basketball or anything else. And the more it stays small scale and free form, the less it will be like that. So if it’s an individual streamer and they have a few thousand followers, I don’t see them doing tape delay, I don’t see them having much to do with censorship, unless something changes. But if it’s a big pre-planned event with 50,000 people watching live and 10 million people online and Starbucks is sponsoring it, I think you could expect to see it take on more corporate form and have tape delay, some official censorship and maybe some self-censorship.