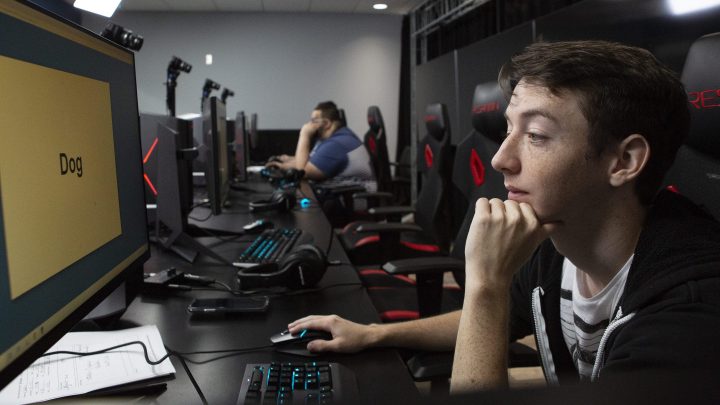 COPY
James Heseltine, 20, takes the impact test. The impact test is a concussion baseline test that measures the 5 executive functions of the brain, including visual memory, verbal memory and reaction composite. Evey Wilson for Marketplace

James Heseltine, 20, takes the impact test. The impact test is a concussion baseline test that measures the 5 executive functions of the brain, including visual memory, verbal memory and reaction composite. Evey Wilson for Marketplace
Listen Now

When it comes to sports injuries, professional video gamers are probably not high on anyone’s list. But the repetitive motions that come with playing video games for hours can take their toll.

“With anything that’s done in excess you’re seeing overuse injuries: a lot of wrist injuries, a lot of back, neck injuries,” said Joanne Donoghue with the Center for eSports Medicine at the New York Institute of Technology.

She says people who play video games at such high levels can get really hurt.  “A lot of them are not even aware that these are side effects of what they’re doing. It just kind of comes with the territory for them,” she explained.

But some experts are starting to pay attention, such as Dr. Vonda Wright, chief of sports medicine at Northside Hospital in Atlanta. “This is all part of treating this newest group of professional athletes like we’ve always treated traditional athletes,” she explained.

Wright has donated time in a partnership with local esports company Skillshot Media to give gamers more access to medical care. Skillshot is like a traditional sports league: it hosts matches that pit independently-owned teams against each other.

“Thinking about overall player welfare is an important goal for us, since really they’re the most important entity in the whole ecosystem. It’s all about them,” said Todd Harris, who runs Skillshot.

James Heseltine, a professional video game player for a company called Obey Alliance, said that it can be mentally and physically challenging to compete at the professional level.

“It is draining,” he said. “Some of the games can go for 60 minutes. It’s terrible if it goes that long.”

Heseltine has been playing professionally for a few years now and hasn’t suffered any major injuries. Still, every now and then, playing leaves him with a sore neck. On a recent Saturday, Heseltine and others gathered for basic physicals that included a range of motion exercises and a vision test.

Donoghue says health care professionals need to start paying attention to gamers as pro gaming grows and as colleges and high schools around the country start their own esports programs.

“We’re going to have to develop new guidelines for this area of competitive gaming, and I think it’s actually going to be a booming field for people in sports that start to take notice,” she said.

Wright and her team are also getting a chance to do early research on these athletes. She’s trying to figure out what long stretches of intense gaming do to the human body. Wright will also build custom workout plans for the players in the Skillshot Media league to help them head off common injuries. “Tendon issues, postural issues, low back pain,” Wright said. “What we’re trying to do is not only predict those injuries but prevent them.”

Newzoo, which tracks the esports industry, says its audience could top 450 million viewers and its revenues could exceed $1 billion in 2019.

For gamer Heseltine, playing professionally still doesn’t really feel like work. “Nah, I just feel like I’m hanging out with friends, playing games, which is what I’ve been doing since [I was] a kid,” he said. “I love it, and I hope I can do it for a while.”

Heseltine says if taking better care of his physical health can help him have a longer esports career, he’s game.