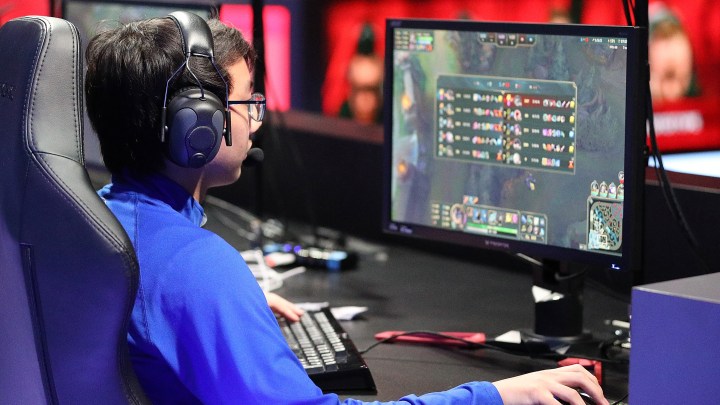 Colleges have been in session for a few weeks now, and even at schools with students physically back on campus, some are missing athletics. The Big 10 cancelled fall football, and it may not be back this year. But that hasn’t stopped some forms of campus competition — there’s still esports.

“A lot of the esports activity that we have been hosting in person can also take place entirely online without impacting pretty much any of the operations,” said Michael Fay, who directs Rutgers University’s esports center.

The school built that center last year, featuring 60 state-of-the-art gaming PCs. Fay said it also boasts a “broadcast studio in the back where we broadcast all of our competitions. And then it also features a competitive lounge where the teams can review their game play and discuss strategy.”

Rutgers’ center never opened, because of the pandemic. That might be the least of their financial problems right now: The school could lose tens of millions of dollars in potential revenue without a football season.

Michael Brooks, executive director of the National Association of Collegiate Esports (NACE), says shifting focus to esports is not going to fill that massive financial hole: “There is revenue that’s out there. Is it anywhere close to what the bigger schools with basketball, football are seeing? The answer is no. It’s not there. It’s not even close. We’re still trying to figure out what revenue models are out there.”

He said whatever revenues schools do eventually get could come from selling tickets to watch players compete online, corporate sponsorships or donations.

That uncertainty might put some universities off. Setting up some top-end computers and a training center won’t cost nearly as much as a football stadium. But that initial investment could be too risky when higher education budgets are getting cut left and right, said Anthony Hennen, who writes about higher education at the James G. Martin Center, a conservative think tank. “I don’t think there’s been a really good case study showing that there’s been any profit coming from these things yet.”

Hennen said it’s not clear that fans who usually watch traditional sports will reroute their passion to esports. “I don’t imagine many baby boomers are gonna give up on NCAA football and instead pivot to watching their local university play on Twitch,” he said.

Still, more schools are trying to get esports programs started. Since the pandemic, Brooks says there’s been an uptick of colleges asking NACE how it all works.

For Tyler Salanitro, a freshman at Marietta College in Ohio, it’s an exciting time. He’s there on an esports scholarship. Nearly 200 U.S. colleges offer around $15 million per year in scholarships, according to NACE. Salanitro says he misses in-person games and practices, since most of his teammates are training remotely. He masks up and goes to Marietta’s esports center. “We have put up barriers between the PCs so that they can have more people practice at a time,” he said.

Still, Salanitro’s looking forward to several tournaments just this month. And he dreams of going pro.

“More people are getting invested in watching people play video games,” Marietta esports coach Matthew Williamson said. “And we’re seeing that same hype trickle down to the collegiate level.”  Williamson thinks just like the fan base for professional teams is growing, it’s only a matter of time for colleges.

And with traditional sports at Marietta and other schools on hold for the rest of 2020, time may be on esports’ side.