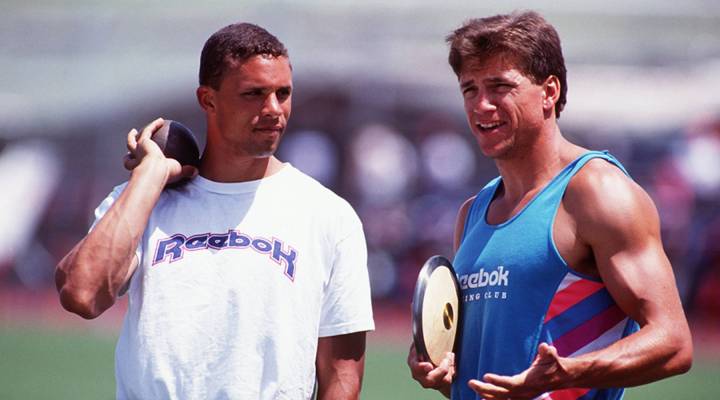 Twenty-five years and several Olympics ago, two decathletes became the focus of nationwide attention when they were featured in a dueling ad campaign for Reebok. The ads pitted Dan O’Brien and Dave Johnson, the first and second best decathletes in the country, against each other in the lead-up to the Olympic Summer Games in Barcelona. But $30 million later, things went awry.

It’s a story that host and producer Jody Avirgan chronicled in ESPN’s “30 for 30″ podcasts in the episode, “The Trials of Dan & Dave.” What follows is an edited transcription of his interview with Marketplace host, Kai Ryssdal.

Kai Ryssdal: I’m going to go out on a limb here and say that this ad campaign by Reebok might have been the most famous Olympic ad campaign maybe ever. You?

Avirgan: I think that’s probably right. We haven’t done any “30 for 30s” on other big ad campaigns, so there you go! You know, and the real question is: Is it famous because it was considered “a bust” or was it just a huge play regardless, and maybe would have been the most famous, you know, even if it hadn’t turned out the way it turned out.

Avirgan: So Dan and Dave were two decathletes in the early ’90s. They were at the top of decathlon. They were both Americans, basically No. 1, No. 2 in the world. And going into the Barcelona Games in 1992, Reebok decided to go all-in on these two athletes, and they launched a campaign “Dan versus Dave.” It kicked off with four different ads running through the Super Bowl that really hyped, in this sort of very mysterious manner, this looming showdown between Dan and Dave.

Avirgan: Yeah, there was this moment, well — it’s not one moment. I think you can write the kind of history of Reebok and Nike as basically every 10 years Reebok convincing themselves that, you know what, we’re going to finally win the sneaker wars and we’re going to overtake Nike. This was one of those moments in the early ’90s where they really thought that they were going to become dominant and really make this big play. And, you know, in retrospect you go, really? Like you were going to take out Nike with two decathletes? But they were only able to make these big splashy plays by picking relatively obscure athletes from a relatively obscure sport. They weren’t going to compete with Nike with NBA athletes or NFL athletes. They needed to do something splashy in order to try and win this battle.

Ryssdal: So they get to the Olympic trials in New Orleans in the summer of ’92. They are probably the most famous athletes in America in track and field, for sure, possibly the world. And it all comes down to this. And here’s my answer to your question in the beginning. I think this ad campaign became what it was and it became this thing of culture because one of them didn’t make it. You know?

Avirgan: Yeah. Well looking back, what everyone remembers is that every single one of these ads starting in the Super Bowl ends with Dan versus Dave to be settled in Barcelona. Well, you know maybe this is too complicated to get into a national ad campaign, but you have to qualify in order to get to Barcelona and have that showdown between Dan and Dave. And of course famously Dan O’Brien does not end up qualifying. He was the best decathlete at the time. I think Dave Johnson would admit that as well. And he just had basically his one off day in a kind of like, 15-year stellar career on that day in New Orleans in that qualifying event for the games. And all of a sudden the Reebok executives are going, uh oh, we made all these promises, and now one of our two guys is not going to be in Barcelona.

Ryssdal: This makes me a terrible person but maybe my favorite piece of tape in this entire podcast is the Nike guy sitting in the stands at the Olympic trials in New Orleans watching Dan O’Brien no-height the jump:

Yeah, we were actively hoping that something bad would happen! I don’t know, I don’t know how else to put it. I’d like to lie and say, no it didn’t make a difference, but it made a difference — of course! The truth is we were just f***ing happy! I mean, what are you going to say?

Avirgan: Yeah, I mean, that might be my favorite piece of tape as well. I mean, you know, what else would you expect a Nike exec to say? But funny enough, actually both Dan O’Brien and Dave Johnson end up becoming Nike athletes later down the line in their career, and they actually got to know this exec pretty well so he’s pals with them. But at the moment, sure there’s a part of him that’s like, “Yeah, great!” Like to watch your main rival just like, go up in flames like that with this big ad campaign. You know, I like that tape, too.

Ryssdal: Do you think that this kind of ad campaign could work today with Olympic athletes just because first of all the saturation of the Olympics in culture today, but also because of how cynical we’ve become about marketing and sports?

Avirgan: It’s a good question. I mean I think we can look to this year, right? We just had a Super Bowl, and the ads that NBC was running were kind of, I would say, for the more typical group of sports. You had your figure skaters and your downhill skiers. They weren’t plucking a curler and being like, we’re going to turn this person into a star. We don’t maybe see as much of this kind of like, we can through sheer force of, you know, money and marketing turn a relatively obscure person into a huge star overnight. I think those days are probably over.