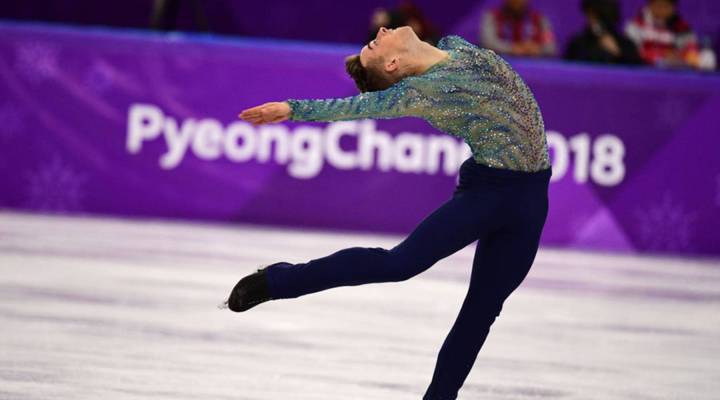 Figure skating really shines with all the benefits of 4K, says Sam Machkovech, a writer for Ars Technica. Above, USA's Adam Rippon competes in the men's free skate event during the Pyeongchang Olympics on Feb. 17. ROBERTO SCHMIDT/AFP/Getty Images
Listen Now

Watching the Winter Olympics on your phone is great and all, but if you’ve spent a pretty penny on an ultra-high-definition TV, an iPhone probably won’t cut it. How, then, does one watch the winter games in glorious 4K? Well, it’s complicated. NBC is delivering 4K video of some events the day after they air, but that video is difficult to access even with the right TV and set top box. Sam Machkovech wrote about this very problem for Ars Technica. He spoke with Marketplace Tech host Molly Wood about the Olympic 4K rigmarole. The following is an edited transcript of their conversation.

Sam Machkovech: One major reason [accessing 4K broadcast is difficult] is because we need all of these cameras in the pipeline, either in 4K or even 8K, that can get out there. And especially in a sports broadcast, that means a lot of upgraded cameras and also just to slow down adoption in terms of how we get access to this content. What kind of streaming box, what kind of device do we need, and the confusion that results.

Molly Wood: What I find extra amazing about that is that in watching Olympics coverage, there will occasionally be bragging. It’ll say, “These Olympics are being filmed and broadcast in 4K for the first time.” It’s eight to 24 hours later, right? They say that, but it’s not like if I had that TV I could turn it on and actually watch it?

Machkovech: I’m amazed that they aren’t required by the FCC to put amazing levels of fine print when they boast that stuff in ads. Because, yes, an eight- to 24-hour delay for whatever sport you’re watching and a very limited selection of sports. We have a selected range of hockey games, not every single one, figure skating, short track and ski jump. And that’s it. No luge, no curling, no snowboarding. A lot of major popular winter sports are not getting that 4K treatment, even though it appears they’re being filmed with newer 8K cameras and things.

Wood: So we talked to NBC, and they said, “We’re going to be providing 4K coverage through our partner OBS.” What do you think is so hard about this?

Machkovech: I do believe that the delay is partially because of OBS controlling this 4K package of content. And I will say the best part about the 4K content I’ve watched, is that there’s no ads. But otherwise, Comcast is doing something really funky as the broadcasting partner. They are forcing everybody to go through a cable television provider. The 2016 Rio Games had a streaming app. That option is gone. It has to be through a proprietary cable box in every option that I found so far. I think it’s a clear example of Comcast using its dominance in the market to say, “Oh you want to watch 4K, huh? Oh, there’s really not many options, so come through our whole box ecosystem of cable TV that people aren’t using as much in the cut-the-cable days.”

Wood: Is it also possible that the market is never going to be ready for 4K? This is a little bit conspiracy-theory sounding, but it sort of feels like TV manufacturers want to sell 4K TVs, but at least so far in the U.S., that’s a harder sell. You know, the files are really big, the cameras are really expensive. I mean, is it possible that 4K is just not really going to come to pass in the way that HD did?

Machkovech: I will never go on the record and say that a fancy new technology is just not going to get adopted. Now, I totally agree that some 4K stuff you’ll look at and go you, “You know, don’t really see a difference.” But the figure skating stuff I saw, I’m going to tell you, sparkles are unreal in 4K, which is a funny thing to say out loud. But there’s something about a really wide-angle shot of a full skating arena in an Olympics broadcast, and seeing a dancing sequence and trick sequence with all of that benefit of the whole 4K pipeline. I look at that and go, “You know, I don’t need 4K, but I can see the difference here.”