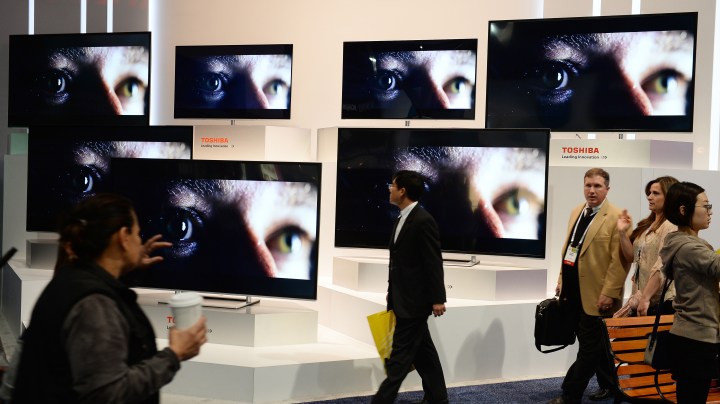 COPY
Lots of films were designed to appear on theater screens or high-definition television. On 4K TVs, some special effects may look fuzzy. Robyn Beck/AFP via Getty Images

Lots of films were designed to appear on theater screens or high-definition television. On 4K TVs, some special effects may look fuzzy. Robyn Beck/AFP via Getty Images
Listen Now

When 4K televisions were rolled out a decade ago, they were out of most people’s price range. But these days, 4K TVs are affordable enough that, as of last year, they were in 44% of TV-owning households.

For a new technology, that pace of adoption is quick, and Hollywood seems to be having a problem catching up.

The special effects and computer-generated imagery that big-budget films are accustomed to using were designed with movie theaters and high-definition TVs in mind. Now that screens are four times sharper, those same effects are subject to a level of scrutiny they weren’t intended for.

Lane Brown, a feature writer at New York magazine, joined Marketplace’s Kai Ryssdal to talk about his own new TV and what it will take for Hollywood to step up its game. The following is an edited transcript of their conversation.

Lane Brown: My old HDTV had died, and I bought a new ultrahigh-definition, 4K TV, which is four times as sharp, and — maybe naively, I expected every movie to look four times as good. And it wasn’t exactly the case. You know, some things looked incredible. You know, movies like “2001: A Space Odyssey,” “Blade Runner.” And then I watched movies like “The Revenant” and “Godzilla vs. Kong” and Marvel movies like “Avengers: Endgame.” And I found that anything with CGI just really did not look so good.

Kai Ryssdal: All right. Well, not to pick on Leo and “The Revenant,” but let’s pick on “The Revenant.” You cite specifically the bear scene, right? So, No. 1, set that up real quick — remind people what the bear scene was for those who haven’t, blessedly for them, seen that movie. And then, what happened when you saw it on your whiz-bang new TV?

Brown: OK, so in the movie, Leonardo DiCaprio plays an explorer named Hugh Glass, who is sort of, you know, cavorting through the modern-day Dakotas. But he’s in the 1800s, and, unfortunately for him, he crossed a group of bears with an angry mother. The bear mauled him. The bear was actually computer-generated. It would have been impractical, presumably, to have a real bear maul Leonardo DiCaprio on camera. And so, in movie theaters — and on my old television — the bear looks photorealistic, perfect. And that scene was completely terrifying. On my new TV, though, I expected it to look great as usual. But I saw that the bear looks a little soft, a little bit blurry. Like it looked, I would say, jarringly out of place.

Ryssdal: OK, so here’s the business model question: We now have, on the consumer end, 4K televisions, which can be had at a not-great expense, especially compared to where they were, you know, 10 years ago, right? One has to imagine that Hollywood now understands that we can see stuff better than they made stuff, if that makes any sense. So how do you square that circle?

Brown: Well, you would think so. Like, suddenly, we have these TVs that are four times as sharp. And they’re, like you said, extremely cheap. I bought my 4K TV for about $600, which is half of what I paid for my HDTV 13 years ago. But, you know, oddly, Hollywood is rendering movie special effects at a resolution that is basically designed to look good on your HDTV. I think eventually Hollywood will figure out that they’re going to have to render special effects at higher resolutions, but it’s going to cost a lot more money. But, you know, they may also realize that maybe it’s better to use special effects a little bit more sparingly than they have. And, you know, movies that use effects subtly, this problem isn’t quite as pronounced.

Ryssdal: It seems like we’re being hoisted on our own technological petard.

Brown: More or less, yes. It’s funny. It’s almost like if the new Apple earbuds came along, and they cost a quarter as much as they used to, and they let you hear sound much better. And then all of the music recorded digitally over the past 20 years sounded not as good, but all the music that was recorded to tape with analog equipment — which is sort of designed to match up to this level of scrutiny — that would sound better.