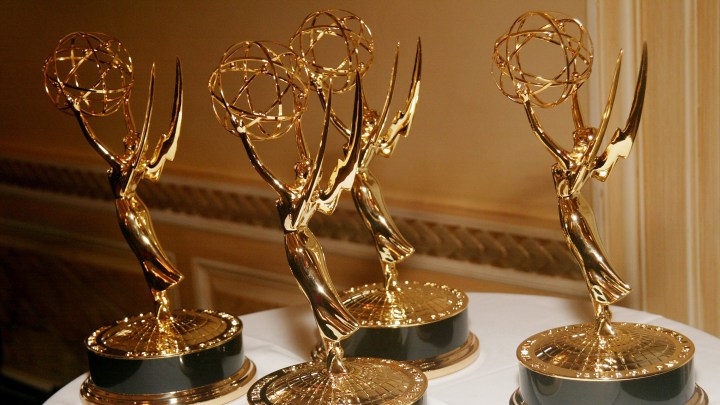 Hollywood is gearing up for one of its biggest awards events celebrating the glitz, glamor and glory of the small screen; the 71st Emmy Awards airs this Sunday. To mark Hollywood’s celebration of itself, let’s do the numbers.

The idea for the Emmy Awards was conceived in 1948, but the Television Academy’s founders struggled to name the award. “Immy” — a nickname for the “image-orthicon camera tube instrumental in the technical development of television” — was originally suggested. The name was feminized to Emmy, and the statuette was born.

The first Emmy Awards ceremony was held on Jan. 25, 1949 and tickets cost $5. A total of six awards were handed out that night to “Los Angeles area programming.” The first-ever Emmy went to 20-year-old ventriloquist Shirley Dinsdale for “most outstanding television personality,” at a time when there were fewer than one million TV sets in the United States.

A special Emmy was presented to Louis McManus, whose statue design was chosen from 47 entries. The nearly 400 Emmy statuettes are still produced every year by R.S. Owens, and made by hand of virgin metal, which is then coated in copper, nickel, pure silver and 24 karat gold. The statue costs about $400 to make, and Marketplace’s own Emmy Award (presented in 2013) clocked in at 7.4 pounds. If the statue were made of solid gold, CNBC estimates it would be worth more than $153,000.

An engraved name plate is made for every single nominee, because even the statue makers don’t know who is going to win. The statue’s atom — comprised of six separate pieces — represents science and technology, while the wings represent the muse of art.

Not everyone who is on a winning team automatically gets an Emmy statue; the number of statues presented depends on the category. For example, the winner of the outstanding commercial category receives two statues: one for the production company and one for the advertising agency. But for the special visual effects awards, the rules stipulate:

“Emmy statues are awarded to the principal contributors directly involved with and primarily responsible for the visual effects achievement. Up to nine individuals may be included on the entry.” (Additional winners can purchase a statue if they qualify.)

Winners are decided by the nominees’ peers. There are currently more than 25,000 members in the Academy, divided into 30 peer groups including animation, stunts, writers and television executives.

It’s not free to enter the competition. Members of the Academy pay $200 per year and do not have to pay an extra fee for their first submission. If nominated, a member receives two tickets to the ceremony as opposed to one (tickets are no longer available to the public, though there are about 300–600 so-called “seat-fillers”). It costs an individual $225 to enter, and $425 for a program.

Saturday Night Live holds the record for both most nominations and most awards, with 260 nominations over 44 seasons and 65 wins so far.

Julia Louis-Dreyfus — a one-time SNL cast member — has been nominated for an Emmy 26 times and won 11 times. She may make history on Sunday if she wins for her performance on “Veep.” She’s currently tied with Cloris Leachman for most wins by a performer — they both have eight.

HBO leads the pack this year with a record-breaking 137 nominations across its shows, including “Game of Thrones.” The hit fantasy series leads for the fourth time with 32 nominations — the most any show has ever received for a single season.

Networks shell out big bucks to get those winged ladies sitting in their offices. TV Guide reports that an average Emmy campaign costs between $150,000 and $500,000. In 1993, HBO reportedly spent $1 million on its campaigns, an investment that paid off when the network took home more awards than most broadcast networks for the first time.

According to Variety, the 2017 Primetime Emmy Awards resulted in $30 million in revenue for the organization, which spent $10.9 million on the show.

While an Emmy is highly coveted, Emmy usage rules clearly state that winning one is not the same as being the best. “The Emmy statue is a symbol of excellence in broadcasting and not of being the best. Recipients can’t claim to be the ‘best,’” the rules read.

And if you’re going to display your illustrious award publicly, it must be left-facing “for legal as well as identity purposes.” Unless, of course, it would look better facing the right — but written approval must be acquired.

The youngest person to win an Emmy is actress Roxana Zal, at 14 years old, and the oldest is producer Norman Lear, who won this past weekend for the first time in 46 years, at 97 years of age.

Twenty-seven awards will be handed out during Sunday’s televised ceremony, which — for the fourth time — will have no host.
And if you’ve ever dreamed of owning a nearly eight-pound, gold plated, winged statue but don’t see yourself being on TV anytime soon, you still have a chance. Engineer Stan Honey has picked up no fewer than three Emmys for his work on technical innovations in sports broadcasting — including inventing that yellow first down line you see during football games.