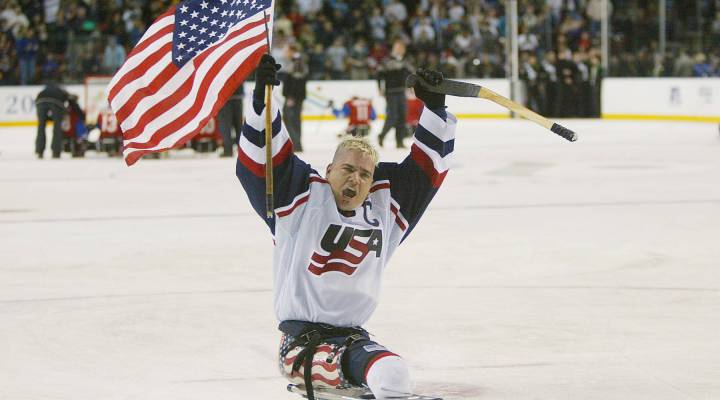 Joe Howard of the United States celebrates a gold-medal win against Norway in sledge hockey during the Salt Lake City Winter Paralympic Games in Utah in 2002. Adam Pretty/Getty Images

Joe Howard of the United States celebrates a gold-medal win against Norway in sledge hockey during the Salt Lake City Winter Paralympic Games in Utah in 2002. Adam Pretty/Getty Images

The opening ceremony of the Winter Paralympic Games was Friday morning in Pyeongchang, South Korea. You’d be forgiven for missing it.

The start of this year’s games aired at 6 a.m. Eastern time on NBC Sports, a relatively new channel that’s pretty high on the dial for folks who haven’t yet cut the cord.

Like the recently wrapped Winter Olympics, the Paralympics are airing live overnight thanks to the time difference, spread across several different cable networks and streaming platforms. Unlike the Olympics, NBC itself is only showing the games in prime time twice: one highlight package for the first day of competition and another at the very end.

It’s worth making the effort to watch, because there’s a lot to like about the Paralympics, even during the smaller Winter Games. It’s five of the best-known Winter Olympic sports, with variations to accommodate differently abled athletes and showcase their unique abilities. Take snowboarding, which was just added and swept by the U.S. team.

Or para hockey, which is just as physical as the game you’re used to, but it’s played on specialized sleds just a couple inches off the ice. Same with downhill skiing, where competitors sit atop one ski. We’ll be talking more about the technology at play at Marketplace Tech next week. For now, let’s do the numbers