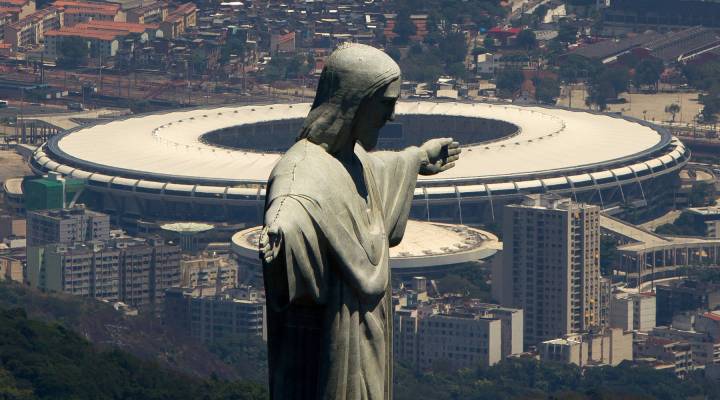 COPY
An aerial view of the Christ The Redeemer statue (F) and the Maracana Stadium (B) on November 12, 2013 in Rio de Janeiro, Brazil. Buda Mendes/Getty Images

An aerial view of the Christ The Redeemer statue (F) and the Maracana Stadium (B) on November 12, 2013 in Rio de Janeiro, Brazil. Buda Mendes/Getty Images
Listen Now

The Olympic games are scheduled to kick off this Friday, August 5th in Rio. Everyone knows that any large, televised event like this guarantees one thing: commercials, and lots of them. Until this year, all advertisements airing during the games were held to strict guidelines under legislation known as Rule 40. However, the United States Olympic Committee has moved to loosen some of these restrictions a bit, with one big contingency.

To find out more about the new Olympic ad rules, we spoke with E.J Schultz, Chicago bureau chief for AdAge who wrote about the rule change.

Rule 40 essentially is one of the tools that the United States Olympic Committee has used to protect the rights of their official sponsors which pay big bucks to obtain the rights to  certain trademarks like the Olympic rings, the Olympic phrases, etc. It previously had barred any non-sponsor from  running advertising during the games,  as well as a few days after and before the games. These non-sponsors were not allowed to use Olympic athletes in any kind of advertising at all, but in response to some complaints a couple years ago during the London games from athletes that were complaining they were sort of losing the right to generate their own  revenue through their own individual brand partnerships, the USOC sort of relaxed the rule a bit. So starting in this Olympics in Rio, the non-sponsors can actually run ads with athletes in them. However there is a huge caveat, and that is they cannot use any of the Olympic imagery [or phrases].

On where this leaves non-sponsor brands and their advertisements:

[Non-sponsors] are saying that these are generic phrases, that they should have the right to use them. Technically the letter of law says you’re not allowed to use those phrases in any way that implies a connection between the athlete and the games  themselves. But practically speaking, it sort of rules out using those phrases at all. They have to essentially make a decision which is, “is it still worth it for us to use our athletes which we’ve signed individual deals with and put of a more generic ad?” And hopefully, that the average viewer sort of makes that connection. Or do you just sit out the games?