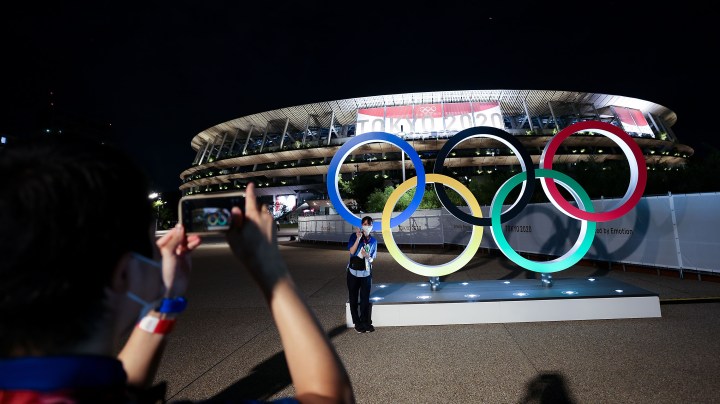 People take a photo of the Olympic Rings outside the stadium during the opening ceremony of the Tokyo 2020 Olympic Games on July 23, 2021 in Tokyo, Japan. Lintao Zhang via Getty Images

People take a photo of the Olympic Rings outside the stadium during the opening ceremony of the Tokyo 2020 Olympic Games on July 23, 2021 in Tokyo, Japan. Lintao Zhang via Getty Images

The opening ceremony for the Tokyo Olympics Friday included kabuki, fireworks and a nearly empty stadium.

It’s not difficult to associate the Tokyo Olympics with the pandemic; the lack of fans rules out the usual pomp and circumstance, and merchandise is still branded as “Tokyo 2020,” despite taking place in 2021.

Economists are skeptical that Japan could possibly recoup the cost of hosting the Olympics. Though estimates for the cost of the Games vary, some experts have placed it at around $35 billion.

“For many cities and many countries, it is a money hemorrhaging endeavor, and it’s looking like for Tokyo may potentially be the same thing,” said Lake Forest College’s Robert Baade, who studies the economics of professional sports.

The COVID-19 pandemic has also thrown a potentially catastrophic wrench in the hopes of any profit from the Games. Portions of the country have already declared states of emergency in response to the pandemic, vaccine rollout has been slow in the country and dozens of COVID-19 cases have already been linked to the Tokyo Games. One Japanese poll found that 83% of survey respondents were against the Olympics being hosted there this summer.

“The risk-reward profile for hosting the Olympic Games has eroded and eroded significantly [for Tokyo],” Baade said. “The economic implications of the Olympic Games becoming a kind of super spreader event is significant. In fact, studies that some economists have done would indicate that, if this was a superspreader event, the economic cost to Japan would eclipse what it’s cost them to this point to host these Games.”

The International Olympic Committee often lauds the benefits that host countries experience, like boosts in tourism or an athletic legacy, according to Baade.

Often, he said, the costs far outweigh the gains: There are substantial environmental costs, and valuable real estate near the hearts of downtown epicenters are used up. People near sporting venues are sometimes displaced and often experience an increased cost of goods and services coupled with reduced services, like public transit. And sometimes that burden is placed on taxpayers.

There are some hopeful examples of what Olympics success looks like, Baade said. This includes Barcelona, which boosted the city’s global profile as a sports destination, and Los Angeles’ 1984 Olympics, which produced a net profit thanks to existing infrastructure.

But the real net cost of hosting the Olympics has more bleak consequences for most cities.

Some have tied Athens’ hosting of the 2004 Olympics with Greece’s debt crisis. When Montreal hosted the Olympics, the city was left with more than a billion dollars in debt that took decades to pay off. The 2016 Rio Olympics ended up costing more than $13 billion, with debts at least in the tens of millions.

And though some venues are constructed to be temporary — in Tokyo, that includes 10 of the 42 Olympic venues — those that aren’t, including some in Athens and Rio, can be left to decay.

Those countries must then deal with the social and political ramifications of the Olympics once all the teams have left.

“When people are asked to pay through their tax dollars, or through reduced public services to accommodate the games, and when economic expectations are not met, those people are going to be angry,” Baade said. “So rioting in Brazilian cities, when the citizenry began to understand just what the implications were of hosting events that were so expensive, rather than bringing a country together politically, I think that the Olympic Games has the potential for really fracturing a nation socially and politically. “

Why would a city even want to host the Olympics at all, given all of its costs?

For some countries, it’s a source of national pride, said Andrew Zimbalist, an economics professor at Smith College and author of several books on the economics of the Olympics and other pro-sporting events.

“Tokyo last hosted the Olympics in 1964, and it was kind of a coming-out party to the world,” Zimbalist said. “They were now establishing themselves as a mature member of the international capitalist community as opposed to a member of the Axis powers in World War II.”

Zimbalist said he saw Tokyo’s bid for the 2020 Olympics as a chance to show the world that Japan recovered from the 2011 Fukushima disaster, though the nation is still recovering a decade later.

Increasingly though, major cities are opting not to bid for the chance to host the Olympics. It’s simply not worth the cost, Zimbalist said.

Bearing the cost in mind, it makes sense that countries in the global north have historically been more likely to host the Olympic Games. Despite being international, the Olympics often take place in those wealthy countries that either have some existing infrastructure to accommodate the events or that are willing to front money to build some.

The U.S., for example, has hosted the Winter Olympics and Summer Olympics a total of eight times, with a ninth slated for 2028. The first Olympics to ever take place in Africa — the Summer Youth Olympics — are scheduled for 2026 in Senegal.

“The politics of it, I think a lot of these emerging economies want a bigger voice in global politics and global affairs more generally speaking. And so they would like to occupy that center stage for a while. And so they’re willing to make that kind of investment,“ Baade said.

The last time the U.S. hosted the Olympics was for the 2002 Winter Games in Salt Lake City. The general sentiment of city residents before the games was excitement, said Stephen Goldsmith, who served as the planning director for the city at the time.

He said there was pushback from affordable housing, mobility and accessibility advocates, but small businesses were excited about the prospects of a boost in revenue from tourists. But those hopes sometimes went unrealized.

“There is a belief that the citizens in the community are going to benefit tremendously from the games,” he said. “And I witnessed small businesses that went out of their way to welcome global citizens to Salt Lake City and the surrounding venues, only to find that they were not getting the benefits.”

Goldsmith said businesses beefed up their stocks of food and beverages, but tourists just stuck to the confines of the Olympic Village.

“I think of it as fool’s gold,” Goldsmith said, “because when I witness the kind of suffering that so many people who were hopeful [the Games] would benefit — themselves, their employees, their businesses —  lost in that, and they lost a lot of money, something which I’ve never seen a final calculation of.”

The Salt Lake City Olympics were not a complete bust, at least as far as debts and unused infrastructure were concerned. The Olympics prompted an expansion of the city’s light rail system, and the athletes village was transformed into dormitories for the University of Utah.

Still, Goldsmith’s advice to other cities or countries interested in the Olympics? Don’t. It’s not worth it.

As long as countries have an interest in establishing or re-establishing their importance on the global stage and are willing to spend the money, bids might continue, Baade said.

While the prospect of the Olympics ever just being hosted in one particular location or being rotated between cities already with the necessary infrastructure seems unlikely to Zimbalist, he sees it as the most logical solution.

“The Olympics were conceived in 1896 as a sporting event, and they’ve become a construction event. We need to return them back, and the way to do that is to find the permanent venue that has the necessary sporting infrastructure, transportation, communications, hospitality infrastructure,” Zimbalist said. “It’s doable; it will save economically, it will save environmentally, it will save socially, and it will reestablish the positive imagery around the Olympics.”

In a digital global age, Zimbalist said, “having them in one place, we still can bring the Olympics to the rest of the world.”