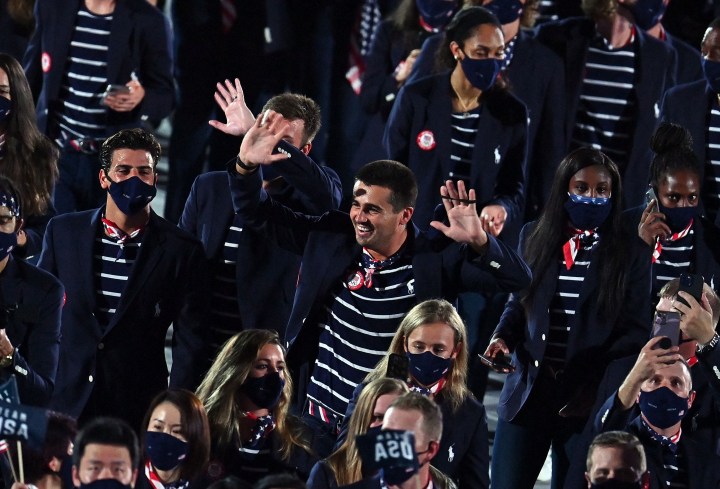 A view of USA's delegation parade during the opening ceremony of the Tokyo 2020 Olympic Games. BEN STANSALL/AFP via Getty Images
I've Always Wondered ...

A view of USA's delegation parade during the opening ceremony of the Tokyo 2020 Olympic Games. BEN STANSALL/AFP via Getty Images

Why is Ralph Lauren the Olympic designer? Is there the same kind of competition for these contracts, as there is to participate in the games?

Team USA makes its debut at every Olympics dressed in the American color scheme of red, white and blue, symbolizing the country it represents in a show of national pride.

At the start of this year’s games in Tokyo, the country’s best athletes donned navy blue blazers, stars-and-stripes neck scarves and striped shirts bearing the Polo logo of American fashion brand Ralph Lauren. It’s been designing the U.S. team’s clothing for over a decade.

“Having an affiliation with Team USA gives Ralph Lauren enormous bragging rights,” said Vanitha Swaminathan, a marketing professor at the University of Pittsburgh. “They’re able to advertise it, they’re able to put their name out in front of consumers globally. And there are billions of people watching the Olympics.”

Back in 2008, just prior to the Beijing Olympics, Ralph Lauren signed the contract to become the official outfitter for the U.S. team during the opening and closing ceremonies, and has been dressing athletes for these events ever since.

Swaminathan said that in any partnership, both parties want to ensure they select someone that will improve their brand image, or at least doesn’t lower perceptions. And having enough money and resources plays an important role. “Ralph Lauren has to have sufficient budget to be able to clothe the athletes,” she said.

Ralph Lauren replaced the Canadian apparel company Roots, which dressed the U.S. Olympics team in 2002, 2004 and 2006.

According to The Wall Street Journal, the partnership ended after Roots presented the U.S. Olympic Committee with “designs the committee deemed too informal.” The WSJ also noted that the “preppy styles” Ralph Lauren designed marked a shift away from the “sporty outfits” worn by athletes in recent years.

Designers can bid for an Olympics deal, which could last years or be short lived. Like many of the athletes they aim to dress, their designs are being judged, and deals can be broken because of competing tastes.

USOC’s director of corporate sales and licensing, Chester Wheeler, told the New York Times that in 1998, the committee reached out to sportswear companies to dress Team USA after athletes indicated they weren’t excited about wearing traditional jackets and ties.

Nike considered a bid for the 2002 Olympics but withdrew because it couldn’t agree to terms with the committee. The year before, the USOC sued Tommy Hilfiger, claiming the brand backed out of an agreement to design outfits for the Olympic games between 2000 and 2004, according to court records.

Ahead of the 2000 Games in Sydney, Hilfiger reportedly sent sketches of a sportswear ensemble that did not impress the USOC’s Wheeler, who told Hilfiger’s lawyer the outfit was “more appropriate to be worn by rappers than by Olympic athletes.” The relationship became so tense that Hilfiger said it wouldn’t enter a contract, although the USOC said they both signed a letter of intent that was binding. The two settled out of court.

Enter Roots, which in 1988 made clothing for the Jamaican bobsled team, and a decade later began dressing the entire Canadian team.

NBC News reported that athletes asked the USOC to have Roots outfit them at the Salt Lake City 2002 Winter Olympics after the success of the Canadian team in 1998.

“Everything came together,” Michael Budman, the co-founder of Roots, told NBC News of the ‘98 Games. “The outfits came together, the team came together — it was the most successful Olympic team in Canadian history. And our competitors in Nagano couldn’t have looked worse if they tried.”