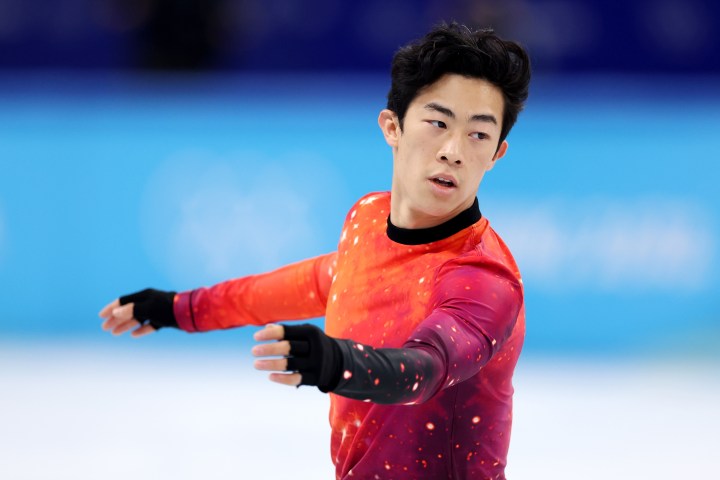 Nathan Chen earned at least $1 million from his sponsors in the year leading up to the Beijing Games, according to Forbes. Matthew Stockman/Getty Images

Nathan Chen earned at least $1 million from his sponsors in the year leading up to the Beijing Games, according to Forbes. Matthew Stockman/Getty Images

Figure skater Nathan Chen nabbed the gold medal for the United States in the men’s singles competition at the Beijing Olympics — redemption for the 22-year-old who came in fifth in Pyeongchang Games back in 2018.

Chen earned at least $1 million from his sponsors in the year leading up to the 2022 Olympics, according to Forbes estimates. Chen has deals with more established companies such as Comcast, Nike and Visa, along with more recent brands, such as Grubhub and the game developer nWay, Forbes reported (nWay also has an NFT marketplace called nWayPlay).

He’ll also earn $37,500 for winning a gold medal in the men’s singles event and $22,500 for nabbing a silver in the team event. Those monetary awards are paid through a United States Olympic & Paralympic Committee program.

Popular medalists can end up raking in millions of dollars in sponsorship deals.

Back in 2002, NBC News reported that figure skater Michelle Kwan pulled in an estimated $2 million a year in endorsements from companies including Chevrolet and Yoplait. Kwan, who won a silver medal in 1998 in Nagano, Japan, took the bronze at the 2002 Salt Lake City Games.

“Traditionally, ice skating — especially for women — has been kind of a treasure trove for those who have reached the medal stand. For men, maybe a little bit less,” said Joe Favorito, a veteran sports marketing consultant and a professor at Columbia University.

Favorito said ice-skating sponsors will typically include companies that also sponsor the Olympics, such as Bridgestone, Toyota, Panasonic and Nike.

There’s also the rare, hallowed Wheaties endorsement. As of 2021, the whole-wheat cereal had featured more than 850 athletes on its coveted orange box, with 77 of those Olympic medalists, according to FiveThirtyEight. (However, the General Mills endorsement is worth significantly less compared to other endorsements, with some athletes offered less than $1,000, The Wall Street Journal reported.)

But nabbing endorsements without medaling can be difficult.

Lloyd Zane Remick, president of the sports, entertainment and communications consulting firm Zane Management, said he’s represented ice skaters in the past, and unless they’ve medaled and are well known, endorsement opportunities aren’t as frequent for them as they are for athletes in other sports, like football or boxing.

Favorito said there can be challenges because “America is about team sports first, individual sports second,” with some exceptions, like golf or tennis. He thinks this is because many Americans grow up playing team sports — think softball, baseball and basketball.

James R. Hines, author of the book “Figure Skating: A History,” said figure skating has fluctuated in popularity throughout its history and can have “ups and downs, like any other sport.”

One of the challenges with ice skating and other individual sports, in particular, is their cyclical nature, according to Favorito.

“Because you don’t have a professional league, it’s hard to stay top of mind all the time once you get outside of the Olympics,” he said.

Neirotti said that for those who do medal, there’s a tight window to get sponsorships after the Olympics — if they don’t get endorsements within a month of the Games, it’s going to be hard to secure them at all.

But it depends on the athlete, Neirotti said. Figure skater Dorothy Hamill, who won the gold at the 1976 Winter Olympics, remained popular for decades, she said.

“Her legacy lasted probably 20 years after she competed. There was something called the Hamill haircut,” Neirotti said, laughing. “She was just the poster child for America. Everybody loved her.”

Neirotti said that for ice skaters and Olympic athletes in general, commercial endorsements are how they primarily make money. “It’s vital,” she said.

The few other sources of income include the monetary awards for medal wins and touring with ice shows, she said, adding that athletes also get a basic living stipend from the U.S. Olympic & Paralympic Committee.

Neirotti noted that it’s expensive to be an Olympic figure skater. Competitive skaters spend between $35,000 and $50,000 a year, which includes travel, coaching and choreography, Money.com reported.

Favorito pointed out that more companies are spending money on sponsorships and advertising.

“Look at fintech now, which really wasn’t even a category 18 months ago,” Favorito said.

NWayPlay, the game developer and NFT marketplace that Chen and other athletes are working with, collaborated with the International Olympic Committee to create Olympic NFT pins.

Any athlete “with a voice,” thanks to social media, can expand their sponsorship portfolio, Favorito added. Brands are looking for athletes who are committed to social causes and align with their values, he explained.