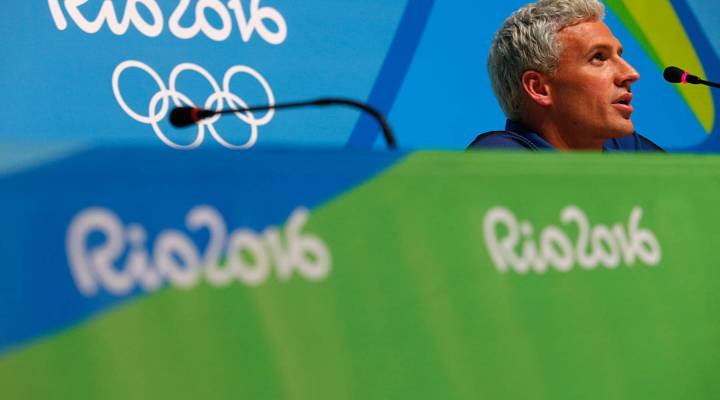 Ryan Lochte of the United States attends a press conference at the Rio Olympics on Aug. 12. Matt Hazlett/Getty Images

Ryan Lochte of the United States attends a press conference at the Rio Olympics on Aug. 12. Matt Hazlett/Getty Images

The sponsors of Olympian swimmer Ryan Lochte are distancing themselves from the athlete after his bizarre robbery scandal in Rio.

Speedo officially announce today that it is dropping its endorsement deal, choosing instead to donate a portion of Lochte’s $50,000 fee to a Brazilian children’s charity.

“While we have enjoyed a winning relationship with Ryan for over a decade and he has been an important member of the Speedo team, we cannot condone behavior that is counter to the values this brand has long stood for,” the company said in a statement today.

While Olympians do earn some cash purses when they win medals, sponsorships are an important source of income for athletes. This loss in sponsorship may be especially difficult for Lochte. The 12-time Olympic medalist already had less sponsors in Rio than the previous games.

“I respect Speedo’s decision and am grateful for the opportunities that our partnership has afforded me over the years. I am proud of the accomplishments that we have achieved together,” Mr. Lochte said in a statement to The Wall Street Journal.

Coupled with Speedo’s decision is Ralph Lauren’s confirmation that it would not renew its contract with Lochte.

Lochte and three other swimmers claimed that they were at gunpoint while in Rio for the Olympics, but authorities quickly discovered the athletes made up the story. After reports of the fabrication spread last week, Speedo had said it was “following the situation” and Ralph Lauren had removed Lochte’s image from its “Meet Our Athletes” page. Lochte’s other sponsor, Airweave, committed to standing by Lochte.

“I respect the athletic performance of Ryan, and as long as he is a respectable athlete, he will remain the U.S. ambassador for Airweave as long as our partnership agreement remains effective,” Aireweave CEO Motokuni Takaoka told Mediaite last week. “We are focused on supporting Team USA and our support to them will remain the same.”