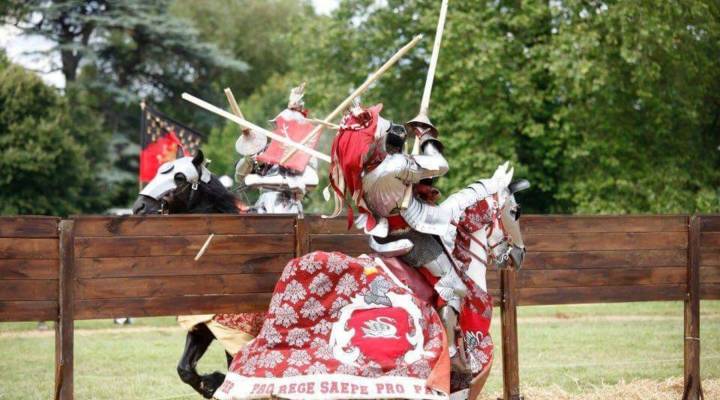 The Olympic authorities are under pressure from a British group to admit a new sporting event into its quadrennial competition. Well, not so new.

In fact, it’s the world’s oldest equestrian sport: jousting.  English Heritage — a public body that conserves some of England’s ancient architecture — hosts jousting events at some of its castles and would like the activity to receive more international recognition.

“Jousting requires similar levels of athleticism and artistry as other official Olympic sports” claimed head of event for English Heritage, Lucy Hutchings. “It’s not about knocking people off their horses. The aim is to win points by striking your opponent in very specific places on his armor. It takes a great deal of skill and strength,” she said.

Four centuries after it peaked as the ultimate spectator sport, jousting is making a comeback. From his stables in Northamptonshire, Dominic Sewell runs a company called Historic Equitation which stages jousts with all the traditional accouterments: his horses are richly caparisoned, his latter-day knights clad in medieval armor and equipped with a 12-foot lance.  Launched only five years ago, the company now turns over almost 2 million dollars annually.  Sewell denies that a suit of armor would look out of place in a 21st century Olympic Games.

“It’s just a matter of perception. Who would have thought of golf as an Olympic sport, or skateboarding? Many other martial arts have been included in the Games, so why not jousting?” Sewell said.

But not everyone involved in the sport is quite so gung-ho about getting it into the Olympics.

Toby Capwell — curator of Arms and Armor at the Wallace Collection in London and a keen jouster – is lukewarm about the plan.

He says he can’t believe the Olympic authorities would allow people to clank around the stadium in medieval armor. He fears they’d be forced to wear modern alternatives, perhaps a costume made of Kevlar and Velcro, and that would drain the sport of its color, flamboyance and historical authenticity.  At its peak, he says, jousting was about display. It was designed to exaggerate a knight’s physical appearance, his stature and bodily strength for the purpose of reinforcing his dominant social position.

“The joust was the proof of the rights of an aristocratic society. It was saying: ‘Super heroes are real and they’re in charge,’” Capwell said.

And although they were supposed to represent the highest ideals of chivalry, many medieval jousters might well fall foul of the rules of the modern Olympics.