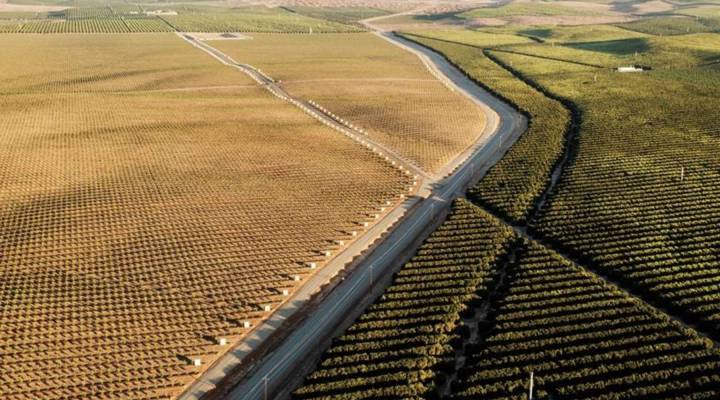 If you’ve ever had Wonderful Pistachios, POM Wonderful pomegranate juice or Halo mandarin oranges, you’ve had produce grown on one of the largest farms in the world.

The Wonderful Company is located in California’s Central Valley where droughts hit frequently, but that hasn’t stopped the company from harvesting record crops.

Marketplace host Amy Scott spoke with Mark Arax, who wrote an article in The California Sunday Magazine about the Wonderful Company’s farming business and issues of sustainability in the Central Valley.

Amy Scott: There’s a stunning aerial photo in the magazine that shows these green green trees surrounded basically by dust. In fact, the piece is called “A kingdom from dust.” It’s a pretty dry place right?

Mark Arax: Yeah. This is the southern end of the San Joaquin Valley. And it’s an area that doesn’t have ground water, so it’s there completely because of the State Water Project. Water that has shipped you know hundreds of miles from the north of California where there are these abundant rivers. The problem is this last drought lasted five years. So the state couldn’t deliver, in one year couldn’t deliver any of it. So the question before me was how are these guys farming? And in fact these guys were able to squeeze and buy water in the open market, and do a few other things to keep their crops going and they were in the midst of drought. They were actually harvesting record crops.

Scott: So you set out with this question: how was he defying nature? And one of the things he was doing was sort of an off-the-books irrigation deal?

Arax: So because there is no groundwater out in Lost Hills, they came up with this idea of pumping groundwater from 40, 50 miles away. This water basically came from a land owned by someone who’s also a near billionaire — a guy named John Vidovich. And Vidovich ended up pumping water an extraordinary amount of water out of the ground in an area where they’re pumping so much water on the ground the land is sinking. And he was able to use canals and pumping stations to then get that water in this pipeline that very secretively was connected to irrigation ditches in Lost Hills. And so that water was feeding Resnick pistachios and almonds and keeping them alive in the worst of the drought.

Scott: So we should talk about the labor that makes this all possible. A lot of it is undocumented and they are in these sort of company towns that you describe that are maybe even more sort of dedicated to the company than most.

Arax: This place called Lost Hills, it is kind of a modern-day company town not unlike Hershey, Pennsylvania. And the Resnick’s run the place, that’s where this story gets conflicted and very complicated because in the last five to eight years they have committed millions and millions of dollars to making this place better — educating the children, helping the workers deal with obesity and things like that. So it’s a really extraordinary kind of development that’s never happened in agriculture in California before really to raise the living of your workers.

Scott: How sustainable is this operation given that California only recently came out of a long drought and may actually be headed there again soon? What happens to Wonderful?

Arax: That is the question that you know I’m dealing with in this magazine piece. The footprint of agriculture has grown a good deal beyond what the water can cover. The abundance of that water in good years has created this overreach of agriculture. And then what happens in drought is there is this desperation to keep it going. And then they pump more groundwater. Ultimately,you’re going to dry up that aquifer under the earth, and that’s what’s happening now. And so the question of sustainability is front and center here now in California. How much bigger can agriculture get. In fact it should be getting smaller, more sustainable and that’s what you’re seeing play out on the land right now.

Scott: And of course that could have serious implications for these workers. What happens to them if Wonderful downsizes?

Arax: They lose their livelihood. Already mechanization is changing, you know, the labor situation. The citrus is still handpicked but all the nuts are machine picked, and that’s idled workers as well. So we’re seeing a shift now and then to have nature imposing its will on the situation.