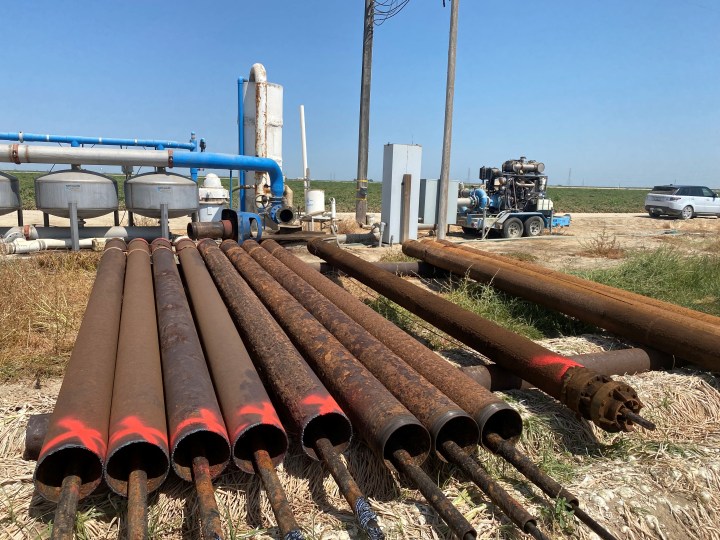 COPY
Terranova Ranch in California's Central Valley was forced to re-drill two of its wells after they ran dry. Courtesy of Terranova Ranch

Terranova Ranch in California's Central Valley was forced to re-drill two of its wells after they ran dry. Courtesy of Terranova Ranch
Listen Now

An historic drought across more than 99% of the Western U.S. is threatening farms and the rural communities that rely on those farms. In California, where a $50 billion agriculture industry grows more than a third of the country’s vegetables and two-thirds of its fruits and nuts, farmers have seen wells dry up and access to state surface water allocations slashed to zero.

Terranova Ranch, a 9,000-acre farm in the state’s Central Valley that grows 25 different fruits, vegetables, nuts and seeds, is re-drilling two of its wells after they ran dry.

“It has affected crops. When we lose a well, we lose the water for the fields that that well serves, so we’ve been trying to move water around, where we can, to continue to keep the crops alive,” the farm’s vice president and general manager Don Cameron told Marketplace’s Sabri Ben-Achour.

Record-high temperatures in the region have exacerbated the water problem and created dangerous conditions for farmworkers. Terranova Ranch, contending with 114-degree days, has limited working hours in the fields and rescheduled onion harvests to nighttime when the air is cooler.

“Around the fields, we’ll put lights and it’ll look like a football game going on,” said Cameron.

Lower yields for farmers could result in higher food prices — a situation Cameron says could worsen in the coming years if droughts become more frequent.

“We’re already seeing our buyers offering us a 15% increase in prices this year, and we think next year could be even worse. And because California produces so many crops, when we have problems here, this is going to affect food prices. This is going to affect what’s going to be in the grocery stores,” he told Ben-Achour.

Sabri Ben-Achour: First of all, what do you guys grow?

Ben-Achour: Wow. How is this drought affecting you?

Cameron: We’re in the process of re-drilling two wells. They actually ran dry; they were shallower wells. So it has affected crops. When we lose a well, we lose the water for the fields that that well serves, so we’ve been trying to move water around, where we can, to continue to keep the crops alive. But it’s affecting our neighboring farms as well. We’ve got many different water situations here in California, and many of the regions just to our west only get surface water, and their allocation is actually zero this year. So if you’re farming in a region that only has surface water, and your allocation is zero, you’ve got to be able to find water from somebody else within the system — which, this year, has been extremely difficult to do. The whole state is pretty well dry.

This year is bad; next year could be even worse.

Ben-Achour: So normally you could buy water [and] ship water in, and that’s not working out?

Cameron: It’s very, very difficult to do and the prices are extremely high — if you can find water to move.

Ben-Achour: I know that you guys have installed a subsurface drip system that helps conserve water. Has that helped out or are you still facing trouble, even with that?

Cameron: We changed all of our cropping over to subsurface drip irrigation back in 2009, and we saw probably a 25% reduction in water use at that point. And even with that, we’re finding it extremely difficult to continue to farm the ground that we are farming.

Ben-Achour: Now, on top of this drought, you’ve got a heatwave; temperatures reaching 114 degrees. How do you work in that heat? And what does that do for your water needs?

Cameron: Our water needs definitely go up when we get into temperatures that high. We always say, if it’s uncomfortable for humans being outside, it’s not really good for our crops. We can stand upper 90s, but when we start getting 105, 110, it puts a lot of stress — not only on our crop, but on the people that are working in the fields. So we limit the hours; we shut our crews down right after noon. That means they’re not making the money they normally would, which is always a stressor for their families. We’ve switched a lot of the onion harvest to nighttime. Around the fields, we’ll put lights and it’ll look like a football game going on. And the crews will work at night when it’s cooler. So we try everything we can.

Ben-Achour: Are you getting any help, in any way, to cope with all this?

Cameron: You know, not really. We’re out here trying to survive and it’s been difficult. We know that there is additional money that will be coming to agriculture for increased infrastructure in the near future. But that doesn’t solve our problem this year. The demand for water in this state is big, not only for agriculture, but for environmental uses and for the municipalities.

Ben-Achour: Were you able to see any of this coming?

Cameron: Yes, I’ve been working on trying to put infrastructure in place to capture floodwater when it is available. I’ve been working on this for over 30 years, and we have just completed a project that will, when there is floodwater available, we’ll divert it, bring it on-farm, and we’ll put it on fields and we’ll be recharging the groundwater. We know that our climate is changing. And we know that, as severe as these droughts are, the floods will probably be as severe as well. We think we can capture floodwater, prevent damage downstream to communities and enhance our groundwater supply for future years.

We’ve seen a lot of the small farmers getting out of farming.

Ben-Achour: It sounds like these sort of extreme weather events — you’re counting on them being a regular fact of life moving forward.

Cameron: Yeah, we’ve seen changes. We’re not getting the frost early in the year. We’ve moved our planting dates earlier in the year and we’re growing later into the fall. We’ve seen unprecedented weather this year — we’ve had 112, 114 [-degree days] in the middle of June — but this year is bad; next year could be even worse. If we don’t have a snowpack in the Sierra this winter, it’s just going to be unbelievable next year. We’re already seeing our buyers offering us a 15% increase in prices this year, and we think next year this could be even worse. And because California produces so many crops, when we have problems here, this is going to affect food prices. This is going to affect what’s going to be in the grocery stores in the future.

Ben-Achour: Terranova Ranch is pretty big, and you are able to come up with some different strategies to cope, for now. What about smaller farms? What do you think is going to come of them?

Cameron: We’ve seen a lot of the small farmers getting out of farming. We have a lot of issues here in California: labor is becoming very scarce, it’s hard to get the labor when you need it; the regulatory situation in California is very difficult to deal with; and the water situation is only getting worse. So we’ve seen a lot of the smaller farmers sell. Fortunately, if they have water associated with their land, their prices have been fairly good. [In] some areas where water is extremely tight or non-existent, values have fallen. But it’s difficult for a small farmer to keep up and remain profitable.