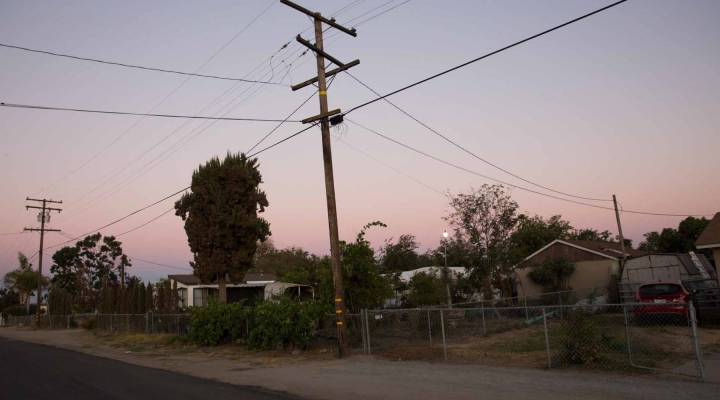 COPY
The hamlet of Okieville in California’s San Joaquin Valley has been hard hit by the state’s drought. Sarah Craig

The hamlet of Okieville in California’s San Joaquin Valley has been hard hit by the state’s drought. Sarah Craig
Listen Now

On a hot and humid day last summer, Maria Marquez greeted a customer from Okieville from a window in her taco truck and asked him for his order. “Un torta asada,” he replied. She then told him to come to the community water meeting at her house.

Marquez’s well went dry almost three years ago during the height of the California drought. That was when she started organizing her neighbors – who were also desperate for water.

Marquez lives in Okieville, a tiny community that’s about halfway between San Francisco and Los Angeles. The small hamlet got its name from migrants headed to California to escape the dust bowl drought of the 1930’s. But today, Okieville residents, mainly Hispanic and low-income, find themselves in a similar crisis. Despite a wet California winter, six years of drought have left thousands of dry wells in the state’s Central Valley. Okieville is among the hardest hit.

The community is located in Tulare County – which is still under an emergency drought declaration kept in place by Governor Jerry Brown after the state’s recent deluge of storms this winter. It’s one of four counties that still receive emergency drought funding.

Dry wells have taken their toll. Marquez said before the drought, she used to have a beautiful green yard and her grandchildren would play outside. Today, her yard is dried up, her family stays inside, and she doesn’t even have enough water for her garden.

Maria Marquez sweeps her taco truck in between customers. She makes a point to talk to those from Okieville about building a new community well.

“Before we used to be able to plant peppers, tomatoes, tomatillos, chiles, watermelons, now we can’t grow them, we have to buy everything,” she said in Spanish.

Since Marquez can’t grow her own vegetables, she has to spend more money on groceries and gas to get to the store. Lots of families have sold their farm animals because there’s no water to give them.

Okieville residents rank among the poorest in the state and the household median income is about 23,000 dollars a year, according to an informal survey by the non-profit Self-Help Enterprises. They are helping Okieville residents organize the community and obtain state and federal funding for a new well.

Eric Coyne is a Deputy Administrator for Tulare County and he says the drought has been a game changer.

“It makes life much more tenuous and immediate,” he said. “So now, people are spending what little money they have on water, because without water everything stops, you can’t cook you can’t grow food.”

Coyne says the state and county provide bottled water and household tank deliveries, which run about $400,000 a month. The district has seen rain this year, but scientists say it could take decades for the aquifer that feeds Okieville’s wells to replenish.

There are about a hundred homes in Okieville and only 14 have water tanks. It costs more than $7,000 per month to fill them, according to Andrew Lockman at the Tulare County’s Office Emergency of Services. For houses without tanks, residents have made do by stringing hoses between houses. The going rate for using water from your neighbors hose is about fifty bucks a month. Jim Smith, an Okieville resident, lost his well and had to drill a new one for $28,000.

“The drought is, just people don’t have money to drill the wells, he said, “and that’s the biggest problem.”

The large-scale farms surrounding Okieville can afford to drill deeper but most farmworkers can’t. Because of the drought there have been fewer crops to pick which means fewer hours of work. A lot of families who could afford to walk away from their homes have left, but many can’t do that or don’t want to.

“These become areas without an immediate livelihood,” said Eric Coyne, “they become places where they’ve lived for generations, and may have a house there that they inherited from the parents, and they paid literally nothing for it, and they can’t afford to replace it.”

Marquez’s efforts to build support for a community well have paid off. With $2.6 million of state and federal funding, Okieville will be getting a new one this October. But some people can’t afford to wait that long and will have little option but to leave.

“Yes, without water, Marquez said, [we] can’t do anything.”